Title says it all. I had a situation where a moderator answered a question and then marked another answer (that said the same thing, but more directly) for conversion to comment because they felt "its length was not up to community standards".

While I think it is important to maintain some set of standards for answers, I don't think it is appropriate for a moderator to remove (and therefore penalize) other answers to a question in which the moderator has also provided a "competing" answer.

In response to some of the comments...

Linking to the question has dealt with the specifics of the question, not the thing I was trying to get addressed. Also, there is no place that shows what mod has actually done the removal. This is not about WHO did the deleting.

Because some are reading the question and ignoring the statement in the title, it bears restating - "A moderator should not be allowed to moderate questions in which they have participated in answering (and vice versa)".

I want this feature added (hence the feature-request tag).

Your answer is a link-only answer, and as pointed out in the comments, those are looked upon as not really good answers. After your post was flagged, I did wait to give you time to expand on the link. Once it became clear from your comments that you weren't going to edit your post, I converted it to a comment.

In response to your edit:

This is not about WHO did the deleting.

Then I don't understand what your question is about. Your title says that moderators shouldn't be allowed to moderate questions they've participated in. He didn't. The body of your questions says

I don't think it is appropriate for a moderator to remove (and therefore penalize) other answers to a question in which the moderator has also provided a "competing" answer.

Again, he didn't do that. He commented and flagged your post and let another moderator handle it. What are you suggesting should be done?

I think we need some facts:

The action that was taken was purely due to the fact that your answer did not meet our quality standards. Nothing less, nothing more. casperOne did not, in fact, use any of his moderator abilities on that question. He used the same privileges available to any other user with sufficient reputation to flag a post.

Per your comment, this has everything to do with the specific question since the scenario didn't happen. However, as I commented under Brad's answer:

Worth noting that the reason no official rule exists is because it's never been a problem. We've all just naturally not taken action that could benefit us unfairly, and asked someone else to look into it. Now that it's actually been questioned, perhaps it should become policy.

I'd support that. A conflict of interest could arise if we:

In the above cases, it's better if we just flag and let another moderator handle it. I also propose no changes to the system, only that we directly address the above in our code of conduct, which (beyond this) has not been canonized.

This has never been, and still is not a problem in need of a solution in the form of policy or anything else. Yet .. it probably wouldn't hurt anything to plainly state what we all took as obvious. I don't want to look back later and wish we had.

You bring up a good question. How should moderators handle questions and answers they have participated in as a normal user?

It's a grey area, but the way that we usually handle something like this is just what was done here. It's generally accepted that moderating a question where you stand to benefit (due to having asked the question or given an answer) presents a conflict of interest, so we usually ask other moderators to look at these items for us. This is done via flags or by offline requests in chat.

While I acknowledge that moderators are more likely to act on a flag or a request by another moderator, there have been several cases I've seen recently where other moderators disagreed. I know I feel a lot better when a third party handles a case where I'm involved.

As Bill states, this is a good example of the proper way to handle a case like this. casperOne flagged what he believed to be a problem with your answer, and another moderator reviewed it. It was only when a second non-moderator flagged the answer for the same reason that this flag was acted on.

Because some are reading the question and ignoring the statement in the title, it bears restating - "A moderator should not be allowed to moderate questions in which they have participated in answering (and vice versa)".

I want this feature added (hence the feature-request tag).

I don't think that would be a good feature.

I agree that in general, a moderator should refrain from deleting answers to questions they answered themselves, but a hard and inviolable, possibly software-enforced, rule that they cannot would be wrong.

I don't think it's controversial that there is no harm in a moderator deleting an "asdfasdf" answer to a question regardless of whether the moderator answered that question too. But it would also be no harm if the moderator had to call such answers to other moderators' attention to remove it.

Even for "wow gold" spam, there's no real harm if that sits a few moments longer in the open until another moderator can handle it.

But if an answer is posted containing hate speech, I would not want a moderator's hands to be tied just because the hate speech appeared while they were composing their own answer.

I want the moderators to be able to delete such upon sight, without any restriction.

To get at your intended point here, rather than the specific case: Moderator actions already have plenty of transparency, with the caveat that you need 10k privileges to see deleted posts and that the owner of a post doesn't see the moderator who deleted it (which seems like an oversight, not something intentional).

Furthermore, preventing moderators from moderating in questions they've answered would be counterproductive at best. Suppose that a moderator is, in fact, behaving inappropriately: this can be brought to the attention of other moderators and/or SE staff, who will deal with the situation as they deem appropriate. If other moderators are willing to condone misbehavior, then there'd be nothing to stop them from cooperating to work around hard restrictions (in fact, such exchanged "favors" are common in environments with a lot of corruption).

Either way, if it's just one bad moderator, they'll be dealt with; if it's systemic, there wouldn't be any real obstacle anyway. Putting a hard restriction in place would mostly serve to make it less convenient for a moderator to use their powers appropriately.

Really, if you can't trust moderators to behave appropriately in a situation as clear-cut as conflicts of interest like this, you've got bigger problems than adding minor limits on moderator power can solve.

I have no qualms about calling out the scenario. I was just about to post a request for censure here on meta myself.

Here is the question: How to prevent spoofing of DLLs in .NET

A diamond mod posted a duplicate answer. He clearly saw the pre-existing answer because he commented on it. After (ab)using his power to ensure deletion of the competing answer, he then racked up a large number of votes and the green checkmark. 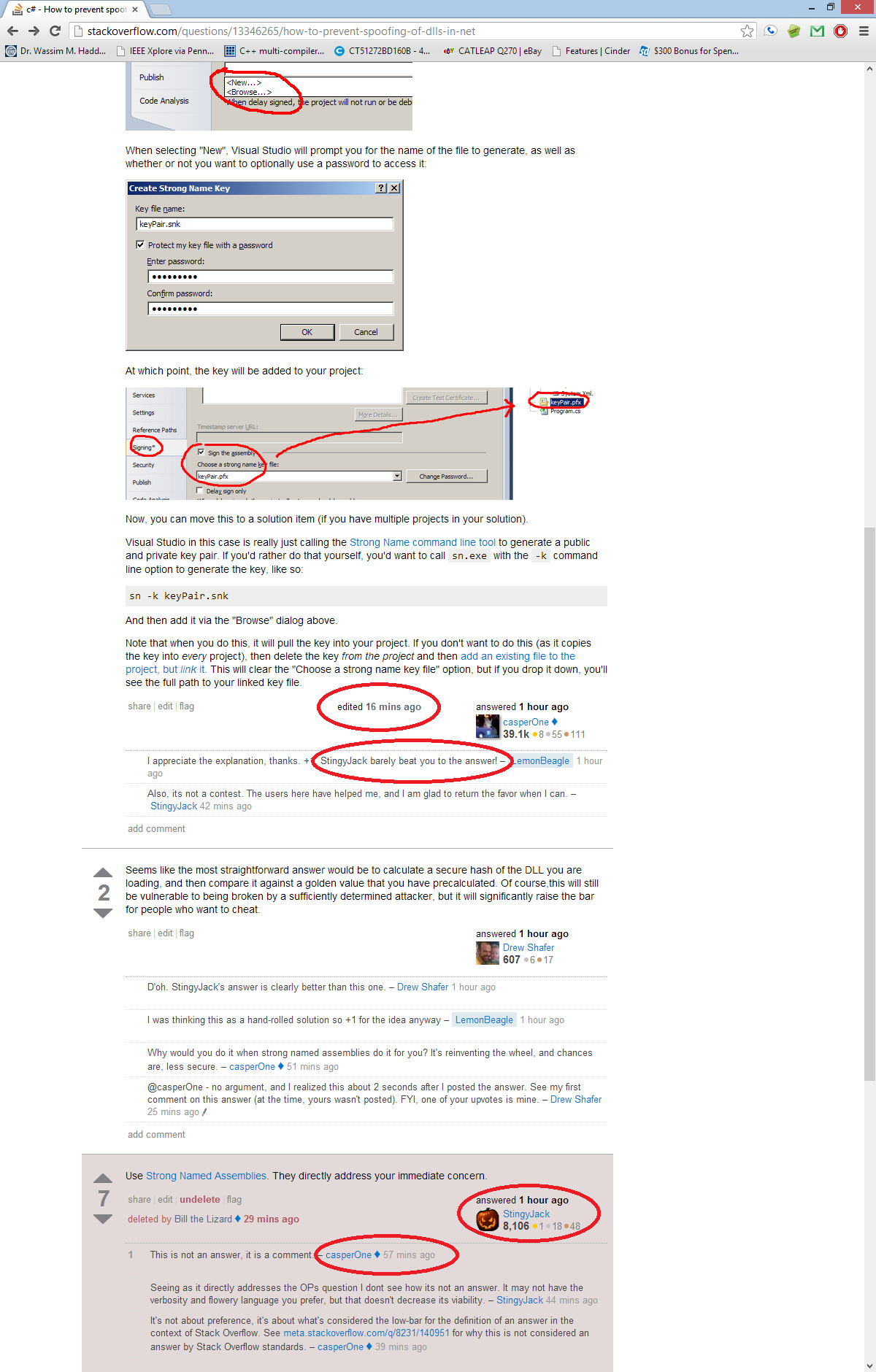 Yes, the earlier answer wasn't very complete. Neither is the diamond mod's answer. It is in fact not a solution to the question asked at all. As previously noted here: https://stackoverflow.com/a/4532558/103167

IMO, this use of authority is intolerable.

Not the answer you're looking for? Browse other questions tagged feature-request moderators moderator-abilities competing-answers .

637
Are answers that just contain links elsewhere really "good answers"?
396
Add a way for moderators to cast a normal, non binding close/open vote
15
How should helpful answers that are just links be handled?
-24
Why are there private instructions for moderators, and where can we see them?
1
As a moderator, how should I treat flags concerning my own activity?
-14
Should Mods be allowed to affect questions they are related to?

139
Can we have drafts for moderator messages?
186
Gold Sportsmanship badge
36
Can we add a hint that the title is important on the "quality standards" error message?
416
Add an "I don't understand" option for review audits
94
Can we have a guaranteed pipeline for responses from Stack Exchange?
25
Could we have better notifications for questions in which we participated?
2480
Firing mods and forced relicensing: is Stack Exchange still interested in cooperating with the community?
2217
Stack Overflow is doing me ongoing harm; it's time to fix it!
195
Introducing the Moderator Council - and its first, pro-tempore, representatives