Is there enough space in the user card for users who have a very large number of badges? 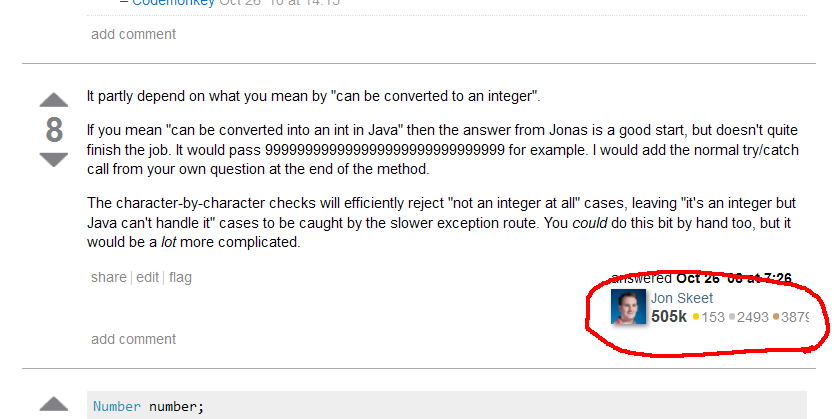 When badges reach an incredibly high number (say in the thousands), abbreviate them as ks as opposed to thousands?

Example: Instead of displaying his current rep/badges line reading

the new version would read

It appears this behavior is only experienced when zooming the browser at odd intervals. After re-checking my screenshot, and the production site, the badges will only cut off at certain levels of zoom.

Let me take a moment to introduce you to a fella who has largely gone unnoticed in Stack Exchange pop culture, Darin Dimitrov. This Stack Overflow user doesn't have a Darin Dimitrov facts page, nor is he treated like the minor celebrity that Jon Skeet has become, yet this person is Stack Overflow's #2 user, sporting a reputation of 378,615 at the time of this writing.

Darin Dimitrov has a whopping 27 gold badges, 618 silver badges, and 853 bronze badges, which is more than many of us have on the entire network! As you can see from one of his posts, he's nowhere near breaking the UI:

Thus, the feature that we're discussing here only visually affects a single user's profile on not just Stack Overflow but the entire Stack Exchange network.

Jon Skeet has answered a total of 23,486 questions on Stack Overflow, out of over 4,000,000 questions on the site, which represents only 0.58% of the total posts on the site. In short, not many people are exposed to what is arguably a borderline case on the network.

I suspect that it wouldn't be hard to update the flair to just round the numbers to "3k" or something like that, and I'm sure that Stack Exchange developers could put a fix in very quickly for this. However, I don't believe it's a huge priority that should be tackled over features that directly improve the Q&A.

This now effects four users (although still not Darin Dimitrov) so I don't really think it's quite as localized as @jmort253 thinks.

Edit: Actually I've stopped counting, Darin is also breaking the cards and there are users in other stack exchanges too.

A compounding facor is that these few users have very high visibility due to the high volume and quality of their contributions. So more people are exposed to the bug than one might think just based on their number.

I think the status-declined decision should be reconsidered.

I disagree with Motti about the localization right now. If only four users are effected, well that is not going to help much right now. In the future, where users have thousands of badges and Jon Skeet has millions... This can be easily applied to help. This is too much of an early time to apply this.

The only thing is that this should be status-deferred. This can be apllied but not now. Until we have a lot more users where the badge count exceed the user card, this request can wait.

A way to bypass this is by looking through the user's expanded usercard (if they have one by having at least 1k rep) or just visit their profile instead. So for me, this should be applied later and not now.

Not the answer you're looking for? Browse other questions tagged bug status-declined badges user-interface user-card .

1
How can I find users who have earned gold badges for their great answers?
15
Who has the most badges? Is there anyone who has them all?
10
Very unusual number of users logged into the chat
3
Offer badges for new users who are immediately productive
8
Gray out the election voting buttons for users that don‘t have enough rep to vote
18
Remove the Analytical badge from the list of badges for sites where no users have them