I really thought that, when the reputation system was changed to update in near real-time, I would never ever scratch my head and ask myself how the heck SO arrived at the reputation I have. (Yeah, I know, half of you are probably now holding their sides. So I am naive. Nothing wrong with that. I have far worse suspicions about me.) But for a while now I have suspected that there were still problems with this. I just could never put a finger on it, because I have long since lost interest in the rep game, and do not follow my reputation very eagerly. So I put this down to old age, too many kids wanting too many things from me at the same time, and the general loss of sanity that correlates with the loss of hair.

However, last night I passed 71000 and that's a number even I can remember. If I remember correctly (I am not sure on this), at one point I had 71002 rep points. Then someone downvoted an answer of mine and I had (and I am absolutely sure I saw that number!) exactly 71k rep points. I got a few updates since then. I seem to remember seeing 71035, and do remember definitely seeing 71065. But just now, I saw that I have 71084, so I looked what happened. A -1 usually indicates that I downvoted someone's answer, after all, and I couldn't remember doing so.

Well, what happened is that I got two upvotes, which came with 10 rep each. Of course, I should have 71085 now then, not 71084. However, there is no indication at all on my reputation tab at which point that one reputation point got dropped and rolled under the fridge. So not only did I downvote someone, "they" also conspire to keep from me the knowledge of when I did this!

Worse, still, even the good old reliable reputation page at https://stackoverflow.com/reputation insists that I could never ever even have seen 71000, because it went to 71001 and to 70999 from there:

What can I say? I am baffled. It's not that I am bemoaning the departure of that one rep point, but as a programmer I usually cling to the illusion that I could understand what's happening around me — at least when it involves adding a few damn numbers! I already called my psychiatrist about this, but he said I shouldn't worry about it. Obviously, he is part of the conspiracy.

So in the interest of the kids that I have to care for, and before I lose what little I believe to have left of my sanity, can someone come up with a reasonably sophisticated subterfuge that I can cling to instead of facing the sad truth?

When a post you have downvoted is undeleted, the corresponding "removed" entry for the date the post was deleted on blinks out of existence. "Removed" entries look like this (courtesy Jeff): 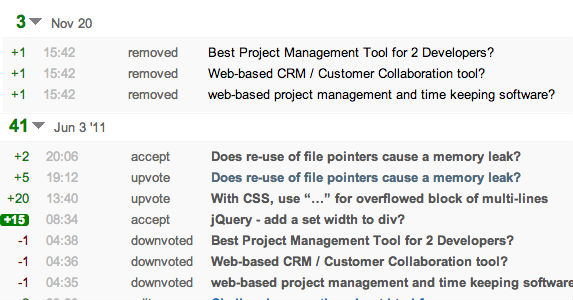 As you can see, they give you a point, and this point disappears when they do. There is no notification on the reputation tab etc, just a point that has stealthily slipped away from the others. This is what has happened. You are probably missing a "removed" point somewhere in your reputation history.

Not the answer you're looking for? Browse other questions tagged support reputation .

2
At which time the reputation loss shows up in reputation log?
124
The Stack Overflow Conspiracy - don't tell Jeff I'm on to him
8
Sudden drop in meta reputation doesn't appear in profile
4
Is this reputation change notification displayed as expected?

239
Should the weight of downvotes be increased?
540
Recent Reputation History Changes
206
More descriptive "User was removed" explanation
187
Wiping votes on deletion of highly active accounts (-865 points on "User was removed")
53
Regain of reputation from downvoted and deleted answers - update FAQ
163
Display lost/negative reputation in topbar achievements
344
Why do I need 50 reputation to comment? What can I do instead?