I edited the post but someone else got attributed for it

After committing I noticed that I added an extra space at the beginning of each of the code lines so I clicked edit again in order to remove those spaces.

However, I couldn't "edit my edit" (which you normally can) and clicked cancel. When I went back to the page, the edit was attributed to someone else.

Since I copied the post and made the edition in a desktop markdown editor, I had a copy of my edition and diff compared that "cached" copy with the edition accepted, which resulted in the texts being exactly the same (no diff at all).

I reckon that a bug must have occurred since the edit was attributed to someone else and I didn't get any reputation.

The user phant0m reviewed your edit. He chose to "improve", but unchecked the "helpful" box. 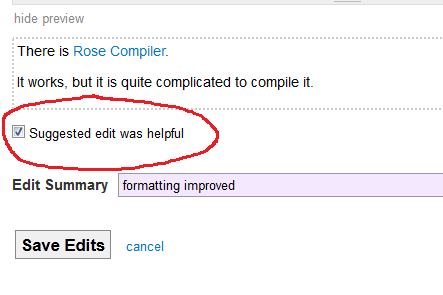 The result is that your edit is rejected and phant0m's edit overrides yours.

Not the answer you're looking for? Browse other questions tagged support edits suggested-edits attribution .

702
How do I get attention for one of my own questions without a good answer?
796
What are the badges I can earn on each site, and what are the exact criteria for earning each badge?
70
Provide indicator that another user is editing a post
77
Allow manual override for edits
69
Lock a post for editing, or at least display a warning
145
Improvements to a suggested edit cannot be submitted when the suggestion is approved during editing
295
How do we encourage edits to obsolete/out of date answers?