A user recently suggested a great edit which added useful information to one of my answers. However, because it was a substantial edit, it was rejected by the reviewers. That's fine. However, as the owner of the post I would like to be able to overrule their decision after reviewing the edit myself (as I was encouraged to do by the notification in my inbox).

Currently, I had to open the edit suggestion in a different tab and manually copy and paste over the changes from the markdown diff to apply the changes. This seems laborious and doesn't give credit to the user who suggested the edit.

I would like a button on the suggested edit page, visible to the owner of the post, which applies the suggested changes, preferably just as if it had been accepted by the reviewers (i.e. giving credit to the editor and the +2 reputation for editing, if applicable).

Related discussions: (note that since this is a feature request, these are not duplicates)

Where the post hasn't been altered since the attempted edit this seems like a fair proposal, given that the OP can simply edit it in anyway giving credit seems fair. Presumably with a message along the lines of; 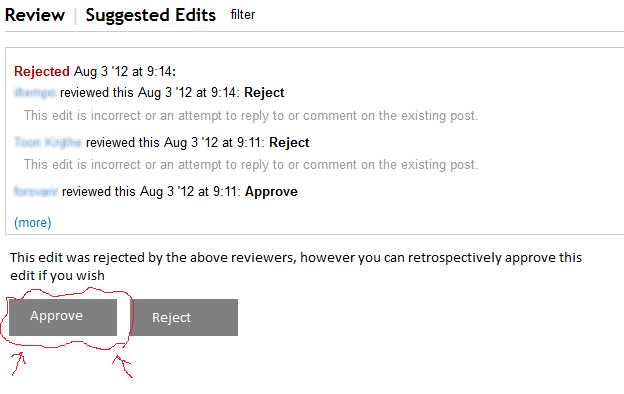 However if another edit has since been made to the post it would become logistically impossible; should the OP choose between the two, attempt to combine them? I think at the point where another edit has been successfully made the rejection should become permanent.

As far as letting the owner of the post retro-actively approve already rejected edits, I sense some logistical problems with that.

BUT It does make sense to allow the owner's single vote to completely approve/reject the edit; giving them final say over the review process.

IF an edit that they liked gets rejected, there's nothing stopping them from going back and making it them self, and you still don't have the logistical problem of rolling back to edits that never actually got applied in the first place.

I had an edit to my post that was made by the user asking the question, who tried out the code, debugged it for me, and posted the bug fixes.

Unfortunately, it was hastily rejected by 3 different users. In order to fix my post I had to study the diffs and manually apply them.

I have some proposed solutions:

Another design possibility would be to put it close to the Next button:

The code to do that should already be in the system. So it would be just about adding another button, which says f.ex. Retroactively approve.

Even if the author of a post would like an edit to be applied in cases like this, the fact remains that the person who suggested the edit was violating the rules for editing, and it's important that the edit be rejected for that reason. If the edit would be retroactively approved by the OP, even though it was correctly rejected by reviewers, then it gives the editor the impression that such an edit is a good edit, and that they should continue making edits like that in the future. That is not the case. It is a violation of the system for them to continue making such edits, and will just result in the reviewers needing to reject more of them in the future.

It's important for such an editor to learn the proper way of adding such content to the site, namely that this content would be best posted as a comment to your answer, or in the event that the edit has sufficient useful information, even its own answer. If the author of the post acknowledges that they want the content in their answer then they can add it themselves, or give permission for the user to edit it in (at which point it would be an appropriate edit). If edits such as the one you linked to are approved then users won't learn the proper workflow for such content.

Not the answer you're looking for? Browse other questions tagged feature-request status-completed review suggested-edits .

106
Could authors overturn recent community review decisions?
15
Allow the original poster the option to apply a rejected suggested edit on their own post
8
Override Rejections to Edits on my Post
2
Allow OP to override the result of suggested-edits review
1
Retroactively approve suggested and rejected edits
16
How should I deal with a good suggested edit to my answer which was incorrectly rejected?
38
User suggested great corrective edit to my answer, but the edit was rejected. What can I do to approve it?
4
How does the community feel about edits that change the author's point of view?
4
Valid edit to my post was rejected. How to bring it back?
5
Correct way to deal with minor detail in answer
See more linked questions

298
How do suggested edits work?
417
Decision on rejected edits should be displayed as a notification to the editor
358
Reject an already-approved suggested edit when rolling it back
145
Improvements to a suggested edit cannot be submitted when the suggestion is approved during editing
118
A way to "downvote" a suggested edit and affect both the edit suggester and reviewers
536
The current review system encourages fake reviews; some people upvote everything rather than actually fixing problems
305
Moderators should be able to manually ban users from suggesting edits
296
How do we encourage edits to obsolete/out of date answers?
237
Review queue workflows - Final release