Why do Community Wiki posts show the user responsible for the largest % of edits instead of the posting user?

I just noticed a community wiki question that I edited in the past shows me as the posting user. Per Tim and Bill's comments below, this is because I am responsible for the largest percentage of the edits.

Why do community wiki posts show the last editing user user responsible for the largest percentage of the edits as the OP instead of the actual original poster? 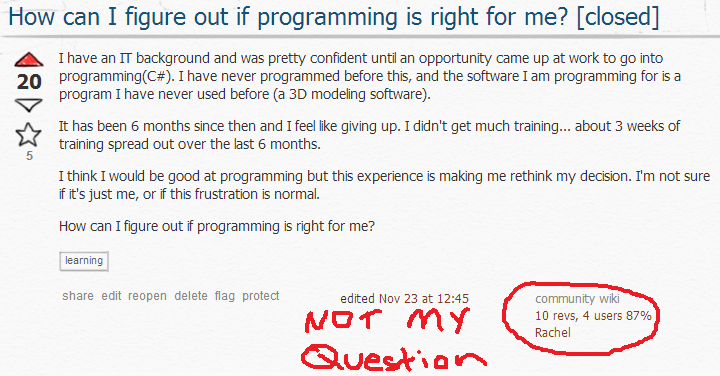 To understand this, you have to recall the intent of Community Wiki was to be... Well, a wiki: a collaboratively-edited document with no real owner. This is in contrast to normal questions and answers, which have an explicit owner (the original author) who retains certain rights over the post even if none of his original work remains in it!

In the early days of Stack Overflow, there was a lot of debate as to how "ownership" would be handled in the case of multiple authors; at one time, there was even hope that a system could be devised for splitting reputation gained from votes between the editors who contributed to a post. Although this would be ripe for abuse, the "strong owner" model also has serious down-sides: those contributing substantially beneficial edits get little recognition and no extrinsic reward for doing so, which can be discouraging (this is also why posts that've been extensively edited by several people automatically convert to CW).

Community Wiki is (was) intended to be a compromise there: no one gets reputation and the owner is de-emphasized - at one time, no names were displayed below the post once it had been edited by someone other than the original author! This isn't as strange as it sounds - when's the last time you saw an author name on a Wikipedia article (outside of the talk or history pages where it's still more of a social convention than anything)?

However, folks accustom to the "strong owner" system elsewhere on SO weren't particularly comfortable with seeing no names on a post, and there were several requests for doing exactly what you describe: showing the original author always, with the last editor separately noted as on normal posts.

Instead, the current system for attribution was established: the user contributing the most content to the post is named, with the % of their contributions and number of other editors noted as well. This provides some attribution, without giving one person undue credit for what is supposed to be a collaborative work.

Because community Wiki posts are community-owned. That's all. The person who contributes the most to the post isn't the OP, but merely the one who made the most significant contribution to it.

In many cases (but not all) the OP turns out to be the most prolific editor (having contributed the entire content of the original post).

Not the answer you're looking for? Browse other questions tagged discussion community-wiki attribution .

1001
What are “Community Wiki” posts?
305
Enable automatic deletion of old, unanswered, zero-score questions after a year?
19
Could the “Made Community Wiki by …” entry in the revision list show the actual reason?
132
Stop using community wiki as a reputation denial mechanism
341
New UI encourages askers to confirm or dispute duplicate votes
295
How do we encourage edits to obsolete/out of date answers?
414
Can a machine be taught to flag spam automatically?
952
Firing Community Managers: Stack Exchange is not interested in cooperating with the community, is it?
550
The company’s commitment to rebuilding the relationship with you, our community