At which point in time a reputation loss will show up in the log: At the day a certain post has been removed or at the day the reputation had been awarded initially?

Background: Today I started with a reputation of 1646. Then I suggested two edits (both accepted) and thus climbed to 1650. I then downvoted two answers, my reputation went down to 1648. So far so good. One of those answers got deleted, the reputation log shows +1, yet my total for now is 1647 instead of 1649.

I am now wondering where the other -2 came from. From another post that has been removed after I suggested an edit as on Dec 10?

I looked at my reputation history with the show removed posts flag set.

And the pop up when hovering over my username in the titlebar: 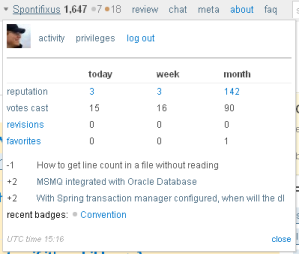 No, the rep loss is displayed in the day the loss occurred1

Go to https://stackoverflow.com/reputation, scroll down, and click the rep recalc button. That ought to fix it. Otherwise, it's a bug.

1. Interestingly, though, rep changes due to deleted posts are considered to have happened in a way such that the post never existed at all (i.e., the loss is counted on the same day as the gain/vice versa) when the system internally determines if you've hit the rep cap.

Not the answer you're looking for? Browse other questions tagged bug stack-overflow reputation .

175
The problem with extrinsic motivation
1
Can we not see the the reputation which is been given and taken?
532
Recent Reputation History Changes
14
Getting two reputation points for a suggested edit even after reaching the 1000 reputation points boundary
2
Does reputation degrade over time?
321
Stack Overflow is getting a Meta of its own
15
How exactly do deleted answers interact with reputation calculation with respect to the daily rep cap?