How can I see the hats I have earned across all of SE?

Currently I need to go to Winterbash and click on each of the hats I have earned then manually count all the sites I have earned each one. This takes some time, and I don't have that many fingers and toes.

Can we have a view which gives the number of each hat earned?

As promised, I've written a Greasemonkey script to do this. 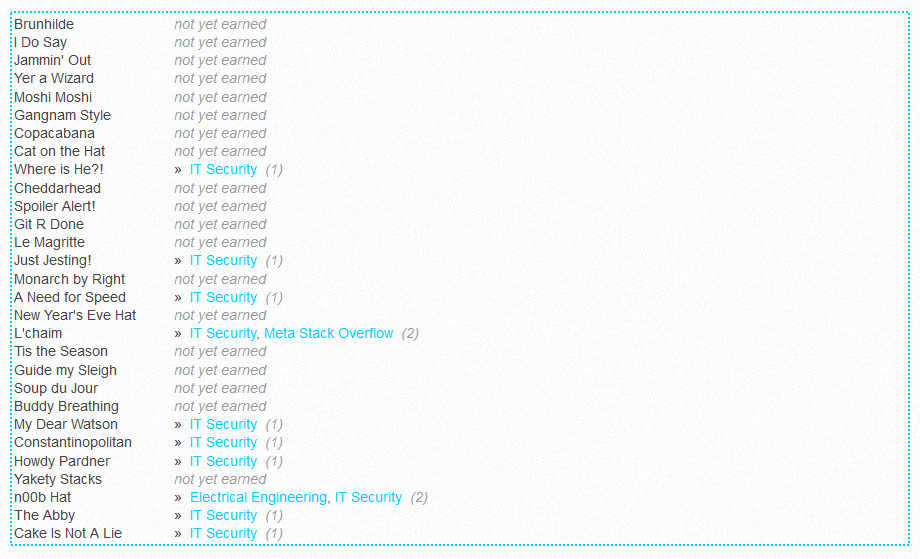 On the front page of Winter Bash, you'll see a small box saying "detailed list". Clicking on this begins the loading process, which involves an Ajax call per hat. From there you'll get a nice list of hats, with a list of sites you've unlocked the hat on and a total count.

This has been tested on Firefox, but may also work on Chrome. If you run into any bugs or have any other ideas, let me know!

Not the answer you're looking for? Browse other questions tagged feature-request winter-bash-2012 .

163
What do you think of Winter Bash?
26
Are we going to have statistics when Winter Bash is over, or will it just vanish into thin air?
10
Is there any way to see my total hat count across the entire network?

550
How about a "Vote not to close" option to counter the "Vote to close"?
852
Can we have the ability to retract a close vote before it closes?
417
Decision on rejected edits should be displayed as a notification to the editor
155
Moderators should be able to remove / burninate a tag themselves
1245
Don't throw away all votes when a user is deleted
13
How can we see hats I earned?
13
How can I see what hats I've earned on a given site?
8
Ability to filter Winterbash hats page