The quest for the winter unicorn of the bash [closed]

Ask Question
Asked 9 years, 5 months ago
Modified 5 years, 6 months ago
Viewed 965 times
43
This question is unlikely to help any future visitors; it is only relevant to a small geographic area, a specific moment in time, or an extraordinarily narrow situation that is not generally applicable to the worldwide audience of the internet. For help making this question more broadly applicable, visit the help center.
Closed 9 years ago.

There are many rumors running about the winter bash site. Many voices of an easter egg hidden somewhere. Beards growing overnight.

Yet, one of the legend lies unspoken. The legend of an unicorn. A weaponized pony. A glimpse of glittering in the snow.

Many have searched for the pony. Fewer have returned to tell its tale.

So now I start the hunt, for only a day remains. Find the glitter, and let the snow fall.

(Trad: how is this easter egg triggered? random? time related? any idea anyone? I notice that pressing CTRL draws snow to the pointer instead of repulsing it, but this is as far as I got).

PS: since we are at it, let's add a little subquestion. Who is the unicorn? based on the color my guess goes to Twilight Sparkle. 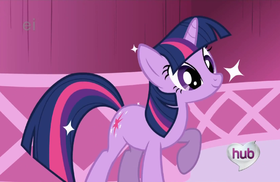 But I could be wrong. Still, there is a resemblance.

Within the home.js script is the following code (indentation and comments added by me) :

I have made some educated guesses as to the meaning of the obfuscated variables.

The crucial condition to make the unicorn appear is if(300<=t.length&&2E3>g&&!C). If my guesses are correct, this translates to "If there are 300+ snowflakes, and they are very close together, and no unicorn has been drawn yet, then draw a unicorn".

Although the pink color and unobfuscated H array are smoking guns, I am not completely confident in my conclusion. I have not personally been able to make the unicorn appear, even after carefully gathering all the snowflakes while holding control. And the OP mentions the unicorn appeared for him after waiting a long time. But the unicorn should never appear, as long as g is too large.

I got my UniCorn 2 Here it is

Because the first time I tried to get the unicorn it appeared so quickly I assumed it want the special Easter egg I spent nearly four hours making the unicorn appear just before Christmas, to see if it would do anything in certain positions, such as horn touching the logo, nose touching the tree etc.

You can easily get it to appear just by holding down ctrl and waiting, but you can speed things up by moving the cursor towards snowflakes.

Turns out it is also possible to collect all small snowflakes while avoiding the big ones, and vice versa but it's hard work!

Not the answer you're looking for? Browse other questions tagged discussion winter-bash-2012 unicorns easter-eggs .

49
I (Don't) See Your Point: How do I earn this unicorn hat?
26
The Quest for the Winter Chickens of the Bash
26
Are we going to have statistics when Winter Bash is over, or will it just vanish into thin air?
5
The snow "Quote Bubble" is back, is the snow unicorn too?
4
What is the relevance of the snow "speech bubble" in Winter Bash?
4
What's up with the Cthulu egg in the chat?