Houston, we have a porblem [closed]

Since it's forbidden to use the word "problem" in titles, and there's not even a way for experienced users to add it (or mods) we all know users just get around that filter by typing various permutations of the word "problem".

The filter has scientifically™ been proven effective. The bottom line there was:

"Hacking around" the filter is in fact very very rare.

I beg to disagree. I tried searching Stack Overflow for the following variations of the title:

These are just a couple of permutations from 5040 possible ones. I also tried searching for variations with left out letters, like proble, or prblm. Here's just a graph of a subset from maybe 20 searches—but in reality, there might be more ways to get around the filter: 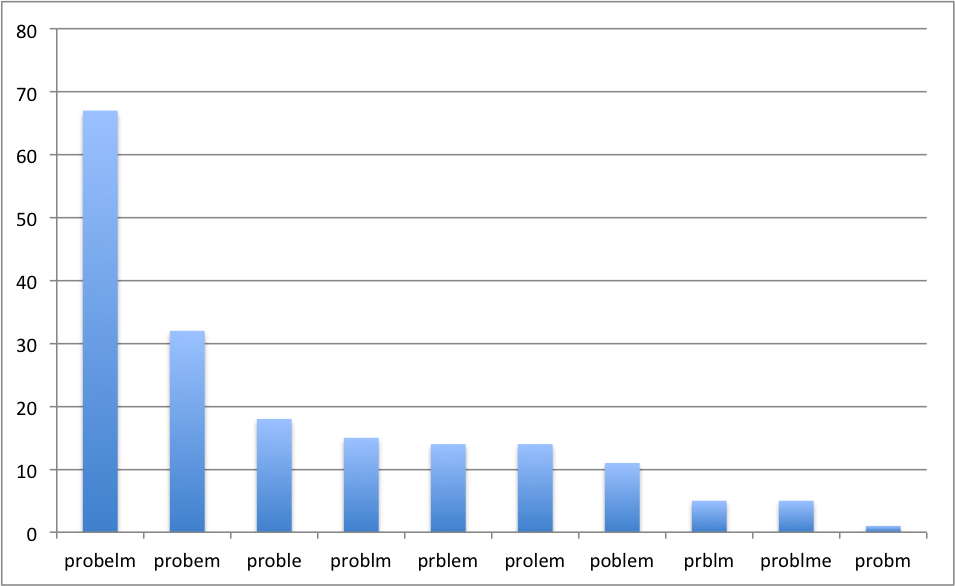 Was this ever intended? I know it saves a lot of bad titles from being created, but on the other hand it enforces even worse titles as well. 3% based on the above stats aren't much, but they're 3% crap the filter actively provokes.

Now, my questions up for discussion are:

In the end I'm just thinking if there was a way to clean up the back log on this, or how to prevent more posts of this sort in the future, even with a title filter in place if it has to be.

4
Deliberate misspellings in titles to get around 'probelms' with banned words?
186
Why can't we use the word “problem” in titles?
191
Let users with sufficient reputation use “problem” in titles
45
The Efficacy Of Stack Overflow's Question Title Filter
45
Moderators should be immune to the word filters in titles
46
Remove blacklist filter for `problem`
1
Should the phrases “Any Idea” and “Is it Possible” be edited out of questions?
0
Can we do something about people adding C# in their titles?
-8
Forbid words “help”, “confusion” (, etc?) in titles

186
Why can't we use the word “problem” in titles?
191
Let users with sufficient reputation use “problem” in titles
46
Remove blacklist filter for `problem`
258
The title word filter is one of the worst ideas ever implemented on SO
45
The Efficacy Of Stack Overflow's Question Title Filter
533
The current review system encourages fake reviews; some people upvote everything rather than actually fixing problems
435
Should Stack Exchange in general be awarding “A”s for Effort?
698
Your answer is in another castle: when is an answer not an answer?
2442
Firing mods and forced relicensing: is Stack Exchange still interested in cooperating with the community?
726
New Feature: Table Support