What to do about wrongly edited code in answer?

I know that we shouldn't edit code in questions, for obvious reasons. But what about code in answers? Does the same rule apply?

In this case, the code in the answer was changed by an edit to reflect what the author wrote in the text, but I believe that this is not was the author meant. The edit changed the code to something that wouldn't even compile, and after that, downvoting started. As I see it, an edit should make the answer more correct, not introduce further errors.

Wouldn't it have been better to add a comment suggesting the changes? Should this edit be reverted?

I could at least edit it to use Integer instead of int, but that would still change the code, and I am not sure if I should do that.

Edit:
Since this wasn't really an edit problem, but a problem with html rendering, I'll add a picture of what was presented here: 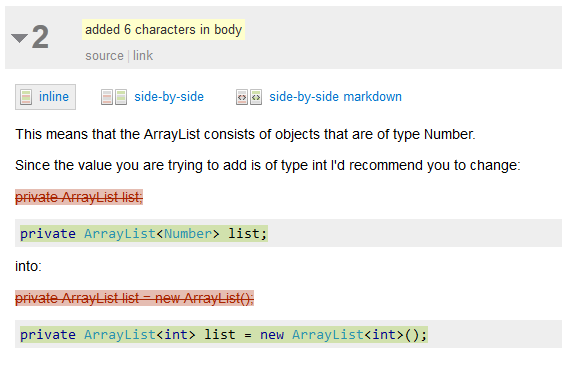 On hindsight, added 6 characters in body would have been a hint.

discussion edits
Share
Improve this question
edited May 23 '17 at 12:36

The edit just code-ified the unformatted code. If you look back at the source of the original post, it read:

See how the code isn't indented with four spaces? The original post did indeed have the incorrect ArrayList<int> bits. But unindented, this renders as:

This means that the ArrayList consists of objects that are of type Number.

Since the value you are trying to add is of type int I'd recommend you to change:

The <Number> and <int> parts are interpreted as HTML tags and become invisible. It looks like the original poster just wrote code without generics, but it's actually improper Markdown formatting!

First off, as John notes the editor in this case didn't break anything - the answer was broken from the get-go, and the edit just made it render properly.

Beyond that, any edit that improves a post is generally a good one, but always try to respect the original author: if you find yourself writing something he might have cause to disagree with, post your own answer.

As for what you should do when you come across something like this?

854
Allow an edit to notify downvoters: "I think I've fixed the issue now - please check"
613
Formatting Sandbox
1474
Fastest Gun in the West Problem
593
Exit strategies for "chameleon questions"
1823
What is the XY problem?
715
Your answer is in another castle: when is an answer not an answer?
2782
A Terms of Service update restricting companies that scrape your profile information without your permission
2478
Firing mods and forced relicensing: is Stack Exchange still interested in cooperating with the community?
2202
Stack Overflow is doing me ongoing harm; it's time to fix it!
738
New Feature: Table Support