Suggestions for Off Topic Tags

I would like to suggest a clearer notification if a Tag is used that doesnt belong on a particular site. For example, on Stack Overflow the ffmpeg tag states:

"questions about using the FFmpeg command line tool should be asked on Super User."

An orange pop up box alerting anyone who adds the ffmpeg tag, suggesting to the user to move their question to Super User, would help to reduce the number of off topic questions on Stack Exchange.

One possible solution to this would be to make use of so-called tag-warnings. Community Managers can apply them after consensus is reached on a site's Meta; a request to give ♦ moderators to apply them has been declined. They used to be visible under the tags field but have now been placed in the second step of asking a question, in a sidebar widget: 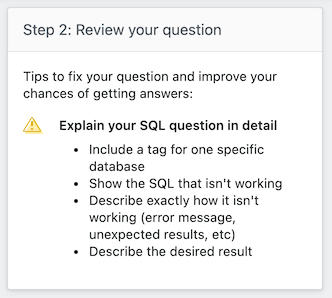 To take it one step further, it's possible to completely block a tag if it should never be used again. The procedure for these requests is similar.

Something you (the general "you", users with the necessary reputation "you") can do right now is to vote to close any of these questions (if they truly are off topic of course) that are still open and, more importantly, vote to delete any closed questions.

Any questions that are on topic but just mis-tagged should be edited to remove the bad tag (plus any other edits needed to clean up the question).

Then once all the questions have either been edited or deleted the tag will disappear from the database never to be suggested again (until someone with sufficient reputation mistakenly recreates it of course).

If it does get re-created then it could be added to the tag blacklist and will then never be suggested again.

All this assumes that the tag is completely off topic of course. As Brad points out in his comment this particular tag can be applied to on topic questions.

I was going to suggest something similar today, until I found this question, already asked eight years ago.

My suggestion would be to have such a notification feature not only for tags which are clearly debunking a question as off-topic, but where usage indicates there is a certain risk for the question to be be off-topic. Candidates for this tag feature could be, for example, the licensing tag or the open-source tag on Stackoverflow or Softwareengineering.

Though both of this tags have well-written recommendations to ask licensing questions not on the former sites, but either on Law.SE or OpenSource.SE, new askers seem to overlook those hints regularly.

On the other hand, there are still certain on-topic questions on Stackoverflow or Softwareengineering where the former tags can be applied, which makes @ChrisF's idea for trying to remove the tags completely not really suitable for them.

For implementing such a feature, the question to be answerered here is: for which tags should this notification be activated, and who can decide about it? I can think of some alternatives here:

Not the answer you're looking for? Browse other questions tagged feature-request tags off-topic .

33
What's the protocol for requesting a tag warning?
54
Give moderators the power to add tag warnings
17
What is a blocked tag?
-17
Add intentionally off-topic tags

312
Tab for questions that are labeled with favorite tags
186
Subscribing to questions and comments that don't belong to you
18
How should ambiguous tags be dealt with?
96
Tool for peer-reviewed no-bump mass retagging
417
Decision on rejected edits should be displayed as a notification to the editor
79
Help us make “Off-Topic” close reasons clearer to the OP
177
Shouldn't “off-topic” be only about… off-topic?
4
Tags with high frequency of off-topic/wrong-site questions
250
Increase close vote weight for gold tag badge holders