I noticed that I can only perform certain actions such as commenting a finite number of times in a given period of time. Obviously, rate limiting is in place to prevent accidental misuse or intentional abuse of certain features.

Where else is rate limiting applied on Stack Exchange sites, and what are the limits?

* For all of the above thresholds for hitting CAPTCHA, if you have at least 200 reputation and have solved a CAPTCHA in the last 5 minutes, you will not have to solve one again.

Thank you for reviewing 20 Close Votes today; come back tomorrow to continue reviewing. 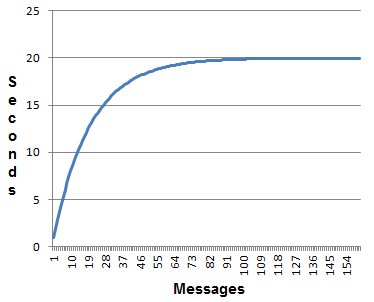 9
50 question per month limit?
58
Is there a limit on how many questions I can ask?
39
How often do CAPTCHAs appear?
18
What actions are rate-limited, and why?
8
How was a newbie able to ask eight questions in six hours on a single site?
-10
Why are we allowed to ask only one question per 40 minutes?
-13
Can the 40 minute timer be removed for high reputation users across the network?
3
You can't post in 40 minutes? I haven't posted anything in two days? Is it a problem?
4
How many messages can I star? Is there any rate limiting?
3
Is there a limit to the number of answers per time period?
See more linked questions

516
How does deleting work? What can cause a post to be deleted, and what does that actually mean? What are the criteria for deletion?
772
Which tools and technologies are used to build the Stack Exchange Network?
606
How does the bounty system work?
880
The Many Memes of Meta
1926
What is the XY problem?
836
What are the badges I can earn on each site, and what are the exact criteria for earning each badge?
71
Lift or reduce the comment rate-limiting timer for moderators
691
What is the association bonus, and how does it work?
39
Implement a Selective Comment Ban