Images and links are not displayed correctly. 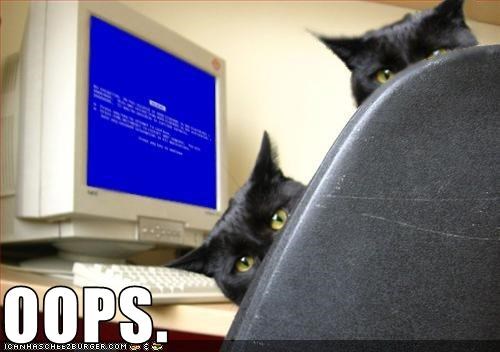 This was entirely my screw-up. Here's what happened.

The problematic change was this one. Ironically the much larger Markdown change I made yesterday did not break anything.

This is how Markdown handles links:

The "Magic" step is the auto-linking – take anything that looks like a plain link, and put it between angle brackets, so that step 3 will turn it into real HTML links.

Before I made the change, step 2 only handled URLs that were preceded by a whitespace character, which is why the fairly common idea of putting a link in parentheses:

never worked as expected – an open parenthesis is not a whitespace character.

The change I made was to allow any non-word character before the URL instead. Which was a horribly stupid idea (and in fact, I had previously shied away from this change because of exactly this problem – but for some reason, this didn't enter my mind yesterday until all hell broke loose).

Now comes step 2. Before my change, it wouldn't touch anything here, because the http:// was not preceded by a whitespace character. After my change, it did indeed touch it, because guess what – a quote sign is a non-word character:

Then the HTML sanitizer removes the illegal "tag" from the first < to the first >, leaving

and finally the tag balancer removes the two closing </a>s, because they have no corresponding opening tags:

So (except for just forgetting this issue despite having previously considered it), why didn't I realize this problem?

Well, the test post I played with while testing had no Markdown-syntax links, just bare URLs. So step 1 never did anything, and nothing broke.

I also ran the test suite in MarkdownSharp, and it didn't report any issues with the change either. Why? Because unfortunately, step 2 is a configurable option in MarkdownSharp, and turned off by default. And most tests run with the default options. And those few test cases that enable this option only test the auto-linking – they don't have any links for step 1 either.

Kevin backed my change out, since he felt that unbroken Markdown would be a nice thing to have, and I tend to agree with that.

This question is thus not completed at the moment, but it will be again after the next build. I've changed step 2 to require a URL to be preceded by a non-word character and neither by =" nor by < to be eligible for auto-linking.

And just to be sure, this time I have not only run the tests with the option on; I have also tested the change against a couple of thousand real-world questions and answers to make sure that the only differences in rendering are intended ones.

A fix for this has been deployed. It looks like some recent changes to the Markdown rendering pipeline went sideways.

Affected posts will display incorrect HTML until they're edited (as we cache the rendered Markdown)... which means I'm going to be poking a bunch of posts for the next hour or so.

Poking completed, all affected posts should have been corrected. If you see anything left over, let me know.

Not the answer you're looking for? Browse other questions tagged bug status-completed markdown hyperlinks images .

18
Link parser can not handle URLs with a second http:// in it
36
More and more images go missing. Can the cooked HTML be rebuilt?
14
URL detecting error with address like "http://en.wikipedia.org/wiki/Octet_(computing)"
4
URL inside parenthesis are not automatically hyperlinked
4
Markdown preview differs from final for `**` surrounding text with line breaks
1
Links aren't detected automatically when in parentheses

1222
Encouraging people to explain downvotes
515
What HTML tags are allowed on Stack Exchange sites?
992
Show all of my question/answers to me even if they are deleted
643
Are answers that just contain links elsewhere really "good answers"?
56
Warn new users earlier that they cannot post links or images
118
Roadmap to HTTPS: serving and uploading HTTPS-images only
143
Editor improvements for images and links
719
Dear Stack Exchange: a statement and a letter from your moderators
580
We're switching to CommonMark
749
New Feature: Table Support