How to delete comment if it seems rude? If someone talks rudely on comments, how to delete that comment?

In your case, as sth says, you probably cannot flag comments because you don't have 15 reputation yet.

However, if you did and couldn't see the flag icon, there are two common reasons:

Your mouse pointer has to be over the comment to see the flag icon.

That comment should not actually be flagged; this is just an example.

For a mobile/tablet device with no mouse, tap the comment.

When there is no mouse and you use a touch-only interface, tap the comment (anywhere) to make the flag and upvote icons appear. Then they can themselves be tapped.

And there is a third, less common reason.

The comment you want to flag has been upvoted, by you.

After you've upvoted a comment (unless you removed the upvote, which can only happen right afterwards), you cannot flag it.

If for some reason you upvoted a comment that you now realize is rude/offensive, off-topic/unconstructive, too chatty, or (more likely) has become obsolete, the workaround is to flag the post itself (with a custom flag) and explain the situation. 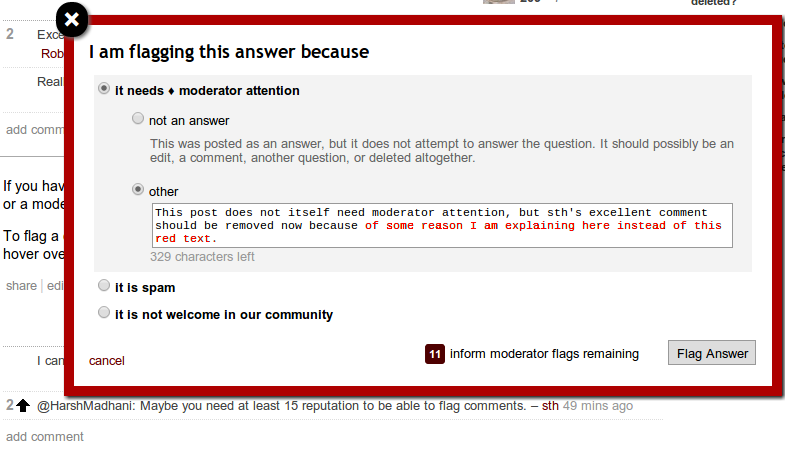 (If there's more than one comment to flag, one flag on the post is still enough--you can explain it all there.)

If you have at least a reputation of 15 on the site, you can flags comments as offensive. If other people or a moderator agree the comment will be deleted.

To flag a comment, there should be a small flag symbol visible to the left of the comment when you hover over the comment with the mouse.

Not the answer you're looking for? Browse other questions tagged support comments deleted-comments .

837
The Many Memes of Meta
549
Cancelling upvote on comment?
50
Allow new users to flag comments on their own posts

1179
Encouraging people to explain downvotes
489
How does deleting work? What can cause a post to be deleted, and what does that actually mean? What are the criteria for deletion?
579
How does the bounty system work?
169
How does comment voting and flagging work?
191
How do comments work?
649
How do comment @replies work?
424
Add data.SE style “magic links” to comments
330
Why do I need 50 reputation to comment? What can I do instead?
118
Make comment flags less stupid