Changes to "close as duplicate"

As you may have noticed, Jarrod's been hacking away at some design changes to the "close as duplicate" UI. These are the first fruits of some discussions we've been having internally regarding the "close" UI as a whole, with the goal being a smoother, easier-to-understand experience for all involved. 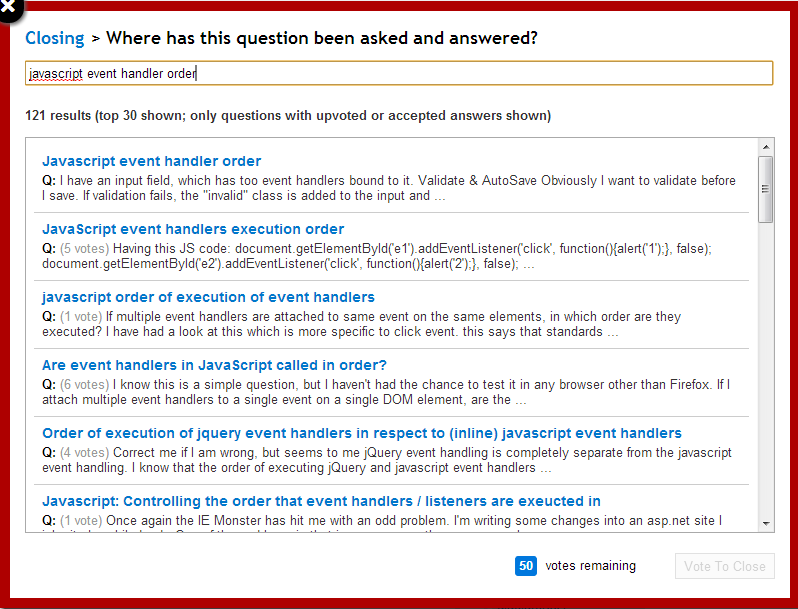 The search field reacts as you type, and there's visible, bread-crumb style navigation near the top of the dialog that allows you to quickly preview different potential duplicates (or back out of the dialog entirely).

The search results include only answered questions (per the usual SO definition of "answered", where the question must have an accepted or up-voted answer). Additionally, close targets are restricted to answered questions even when specifying the ID or URL directly (with the exception of questions from the same author, and meta posts). Moderators can override this last restriction if necessary.

The rationale here is that it can be fairly hard to discern whether or not an unanswered question is actually a duplicate, and even when it is closing doesn't really accomplish very much. When searching for a "canonical" answer in particular, duplicates without answers (or with bad answers) are just noise in the results.

I think this makes sense in theory - so how is it working in practice?

I've had some trouble. Maybe it's just that I'm used to seeing the "Related" posts in the duplicate dialog, but I find now that finding an appropriate duplicate is more difficult now that other "matches" are thrown in.

I also find that the new restriction on answered-only questions multiplies the time it takes to dup-close this rubbish (a daily task taken on by those of us who do not wish to see php and mysql implode under their own weight) by some noticeable factor.

That is, the topic used to be a nice chain of duplicates and nobody really cared whether each one had an answer, because eventually you'd get to the one canonical question that did. Now I have to try to find that myself by browsing the half-million duplicates manually to find the canonical one with decent answers. This is time that I don't have.

I don't see what the question's duplicateness has to do with answers.

Even when it is closing doesn't really accomplish very much

It accomplishes there no longer being two open, identical questions in existence, clogging up the tubes and making my OCD hurt.

This new rule seems to encourage dupes of unanswered questions, which, if no one can answer the question, means we just gather un-closable questions.

When searching for a "canonical" answer in particular, duplicates without answers (or with bad answers) are just noise in the results.

No more noise than they were originally. That post X is marked as a dup of Y doesn't in any way change the noise level of Y. It just means that we haven't added to the noise by having X open as well.

I'd also argue that there's a scenario I've seen a few times where a really poor question has been asked, then closed (as, say, NARQ) without answers. Then the OP, disgruntled, has simply asked it again. Now we're not able to close that as a duplicate?

I get that we can simply NARQ the new one, too, but it hurts my brain that we can longer semantically mark that the OP did a double-post!

It feels like writing magic numbers in code, or re-writing a function definition in each translation unit in which it's used. Or including a value for pi in each source file rather than using some single definition imported from a library.

(edit: turns out same-user-posts are exempted, at least in theory, and I'd missed this.)

Here's my initial reaction to the idea (I haven't put it much to practice yet, especially with the teething bugs).

I wholeheartedly agree with preventing closing an answered question as a duplicate of an unanswered question. I've sometimes seen insistence on closing the later question as a duplicate of the earlier question, which is detrimental to the site: it's best if the main thread is the one with the best answers. Moderators should be able to override this. (For example: a migrated question with only crappy answers that inherited a positive score from the source site, and was reposted and curated (formatting, tags) on the target site. Though in that case a merge is warranted anyway.)

To be fair, the old duplicate close reason did state “This question covers exactly the same content as earlier questions on this topic; its answers may be merged with another identical question.” (emphasis mine). (By the way, as I write, this text is still present in /faq.) The new description reads “This question has been asked before and already has an answer.”, which is better but still tends to give the wrong idea. How about this?

This question has been asked and answered already.

On to the point I have serious doubts about: why prevent closing an unanswered question as a duplicate of an unanswered question? The consequence will be two duplicate questions with no upvoted answers. If someone eventually comes and provides a good answer to one of the questions, it won't help visitors who land onto the other question. Sure, we can link them to each other in comments (post a “possible duplicate” comment manually), but often we'll end up with a comment only on one of the two questions.

I can see the advantage: a new user asking an old, unanswered question gets to revive the subject. But that happens regardless of whether his new question is marked as a duplicate, so I don't see how not closing the question can help.

When two unanswered questions are duplicates, the one that is the most curated should be the main question. As this depends both on the question quality and the activity of the user (who is most likely to respond to requests for clarifications?), I don't think this can be determined automatically. However, maybe the UI could encourage closing the old question as a duplicate of the new one when the old question looks abandoned and the new one looks more likely to be followed by its asker.

Scene: A Week Ago:

Scene: A Year From Now:

"I wonder how to tap a tarnation?"
Searches Stack Overflow.
Hits question 1, no answers, or a crappy one
"Oh well. Guess it can't be done!"

Neither scenario is guaranteed. But we're giving users more opportunity to find quality answers (new users don't read the Related pane) by leaving the possibility of breadcrumbs that we have now.

It has already been "abused" as such. There is also the possibility of further close votes becoming impossible if an answer gets downvoted to 0, leaving the potential dupe in a weird state.

The new wording for questions marked duplicates is sort of strange. It reads:

This question has been asked before and already has an answer. If those answers do not fully address your question, please ask a new question.

Isn't this what happened on the page I'm visiting? Instead of directing users to open yet another duplicate, shouldn't they be asked to start a bounty on the old question?

I honestly don't understand why we're seeing such a negative reaction to these changes. Duplicates are a problem being discussed here for a long time (here and here, for example, not to mention the famous blog post), and the latest changes are trying to address that. And they are good changes.

I'll start with the minor stuff: the [duplicate] label in the title instead of [closed] is a nice touch. Having a question closed can hurt the feelings of even the most experienced users, and seeing it labelled as a duplicate might feel less bad (despite the fact that is still means "closed" in practice). Additionally, we're not referring to duplicates as "exact" anymore. Looks like a small detail, but I believe it will be a time saver. Think of how many discussions you've seen on comments and meta about the "exactness" of a duplicate.

The most important change in my opinion is the new keyword search feature. Finding the right target question can be a very time-consuming process. A lot of people, myself included, mostly rely on Google for that. Now, we can find meaningful posts withough having to leave the dialog. That's orders of magnitude better than what we had before! We can even filter our search with advanced operators like infavorites:mine, which is really useful.

And the preview. Thank you for that. Especially for allowing us to see the answers. I strongly disagree with those saying that the answers don't matter, since we're closing questions. But why are we closing them? It's not (just) because we're classification and cleanup freaks, but because we want to create a more direct path to the relevant information – which is, mostly, in the answers. That's why I also agree with the "answered questions only" policy. As I vote to close someone's question as a duplicate, I truly want that person to find the answer she's looking for. Actually, I believe that's more important than any kind of cleanup. So if I close it as a duplicate of a question without an answer, what is it good for?

I understand the new policy brings a risk of raising the amount of open, unanswered questions on the site, but we'll have to wait to see if that will really happen. If it does, it will need to be addressed. For now, I suggest we take the new feature as an opportunity to work harder on duplicates, as handling them certainly became a less painful process.

Not the answer you're looking for? Browse other questions tagged discussion vote-to-close duplicate-questions .

7
How to close duplicated questions ... when the "duplicate" doesn't have an answer?
2
Why can't I vote to close duplicates when the target doesn't have an (upvoted) answer?
798
Recent feature changes to Stack Exchange
180
We should be able to close questions as duplicates of any question
88
Automatic insertion of dupe-banner after just one close vote is vulnerable to abuse
62
The Wikipedia of Long Tail Programming Questions
123
Can we make the title of duplicate questions say "duplicate"?
53
Changes to "close as duplicate" (part deux)
72
The "Vote to Close" button for duplicates is inefficiently placed and shouldn't move away
34
Revamping the Duplicate question System
See more linked questions

550
How about a "Vote not to close" option to counter the "Vote to close"?
852
Can we have the ability to retract a close vote before it closes?
538
Recent Reputation History Changes
55
Improve UI flow for "close as duplicate"
117
Close vote review audit flawed - fails without casting vote
258
Closing changes: [on hold], unclear, too broad, opinion-based, off-topic reasons, bye-bye to Too Localized
346
New UI encourages askers to confirm or dispute duplicate votes
335
Gold tag-badge holders and moderators can now edit duplicate links