From https://meta.stackoverflow.com/faq#etiquette there is the below guideline:

Above all, be honest. If you see misinformation, vote it down. Add comments indicating what, specifically, is    wrong. Provide better answers of your own. Best of all — edit and improve the existing questions and answers!

Periodically I see answers that have some factually wrong information either stated or eluded to, in them. Instead of commenting at the bottom of the list, where I believe some people won't read down to, thankfully I can follow the advise of "Best of all" (which I personally think is the best idea also) and edit the answer.

However - Find below (from here) what usually happens. I believe you can see other examples, though as covered before, not without clicking through all of my suggestions in my profile. 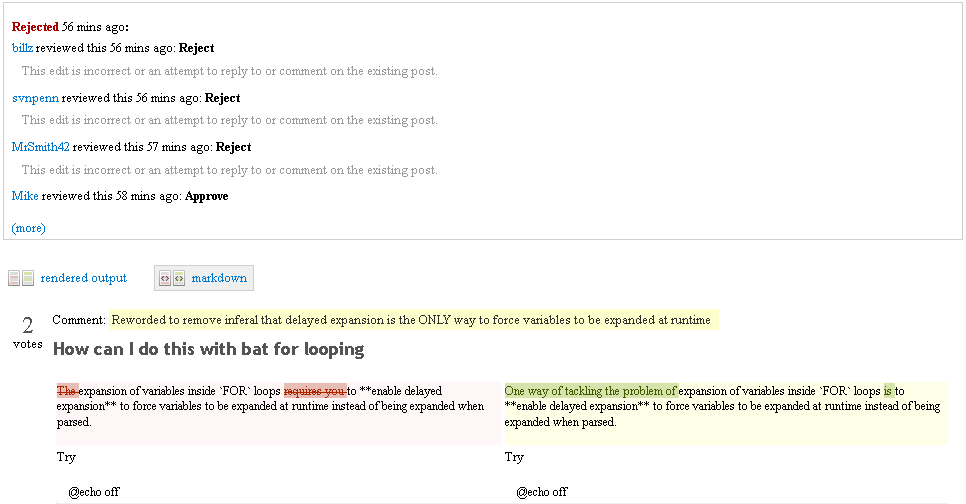 Does anyone else agree that there seems to be some disparity between what appears to be allowed in the FAQ's, but not what reviewers are doing?

discussion rejected-edits
Share
Improve this question
edited May 23 '17 at 12:35

There is somewhat of a disparity like you think.

In practice, edits that fix grammatical and spelling errors in answers are normally approved as long as the edits are complete and necessary. Editing an answer (or any post for that matter) that doesn't really need fixing will likely be rejected as too minor, which is the same as editing an answer and not fixing all of the problems in that answer.

Editing the content of an answer that changes the meaning of the answer (usually added, removing, or changing code) is where you usually get into trouble. I think the current accepted practice is slightly different than the FAQ, but generally speaking, reviewers are not necessarily going to be well versed in the specific language or concepts, so they can only judge on the quality of the grammatical changes. If you see something that is obviously incorrect, best think to do is to leave a comment like you have and wait for the OP (of the answer) to respond to fix it. Once an accept amount of time has passed, probably a couple of days, then the original answerer is no longer around or is not interested in fixing his post. At that point, if you think the change is actually necessary, you can try to make your edit, but be prepared for it to be rejected. Sometimes though, an edit is not needed and a comment is enough.

Where this practice runs into a problem is if there is a technical inaccuracy to an upvoted answer or an accepted answer that would cause the code not to function, or would cause undesirable side effects. Commenting and waiting is still the best solution in this case, and once you've given the OP a chance to act, then go ahead and make the change (just make sure your edit comment is clear). And if the edit gets rejected (which it might), bring it up on meta and someone with full edit privileges will probably help out.

Now for your specific situation. I think your suggested edit falls somewhere in the middle of the scenarios. While there is a technical inaccuracy to the wording of the post, the actual answer is not incorrect, just misleading. The point you are trying to make is a good one but the fact that there was already another answer (which you referenced in your comment) probably makes your point for you. I think I would have rejected this had it come up while I was reviewing.

Not the answer you're looking for? Browse other questions tagged discussion rejected-edits .

1463
Fastest Gun in the West Problem
417
Decision on rejected edits should be displayed as a notification to the editor
537
Recent Reputation History Changes
704
Your answer is in another castle: when is an answer not an answer?
312
Operation 'Split, All The Metas!' Shall Commence On April 16, 2014
2781
A Terms of Service update restricting companies that scrape your profile information without your permission
2453
Firing mods and forced relicensing: is Stack Exchange still interested in cooperating with the community?
482
To reach out: on Monica, the Lavender community, and the future of the Stack Exchange network