When an answer is flagged as "Not an Answer", we are given the option to convert the answer to a comment:

However, if there is a comment on the answer, then the option is grayed out:

This forces me to use the moderator dialog and decide whether or not to move the comments on the answer to wherever the answer is being converted to a comment of.

Do not force me to bring up the moderator dialog on a post when I'm in the moderator queue (especially one that forces me to leave the page). Add another button/tool in the queue which will perform that action for me.

For example, another button would be fine: 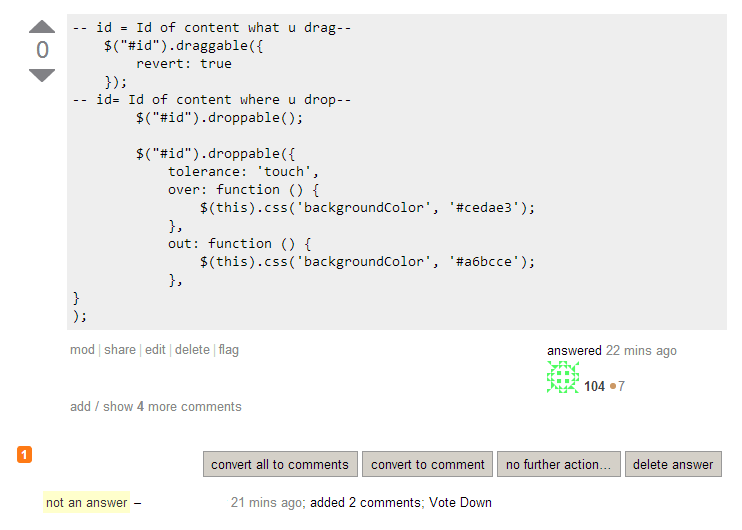 I'm open to other forms of UI, but if you force me to bring up the moderator dialog, then I'm forced out of the queue, and that's a productivity issue, as I was doing work in the queue.

It should be noted that when the button is grayed out, the title is:

This is not something that requires me to leave the moderator queue. I can open the comments on the post, so I can perform the review right there.

I'm OK with some check being put in (like, only enable the button if I open the comments, for example), but that mechanism should be there.

Of course, another solution would be to prevent the moderator tool from having me leave the queue if I am forced to use that, but this would mitigate the issue, and be more in line with the established workflow as well.

It should be noted that this is something that the moderators on Stack Overflow face a lot. Collectively, we blow through about 2-300 NAA flags a day. I would say that at least half, if not the majority of them have comments on them. Sometimes, the whole thing should be deleted, but there are many times where the answer and some of the comments (after we prune them in the queue) should be converted.

We're doing this hundreds of times a day, every day. This would be a huge productivity boost for us.

Starting with the next build, if an answer is flagged as "Not An Answer" and has comments on it, the convert to comment button will be enabled.

Clicking on it will bring up this dialog:

Not the answer you're looking for? Browse other questions tagged feature-request status-completed comments moderator-tools .

1222
Encouraging people to explain downvotes
399
Add a way for moderators to cast a normal, non binding close/open vote
334
Don't remove the @ part of my comment
1248
Don't throw away all votes when a user is deleted
292
Let's stop displaying a user's accept rate
418
Add an "I don't understand" option for review audits
307
Moderators should be able to manually ban users from suggesting edits
127
Could mods have "add comments to chat" to supplement "move comments to chat"?
274
Make moderator messages anonymous