Upvotes after cap + downvote don't compensate for the downvote

According to this answer, upvotes received after a downvote should give "partial credit" up to the cap of 200. If so, what happened here? On Jan 14 I had 27 upvotes, 1 downvote, and 7 of those upvotes came after the downvote -- yet the total for the day shows 198, not 200. 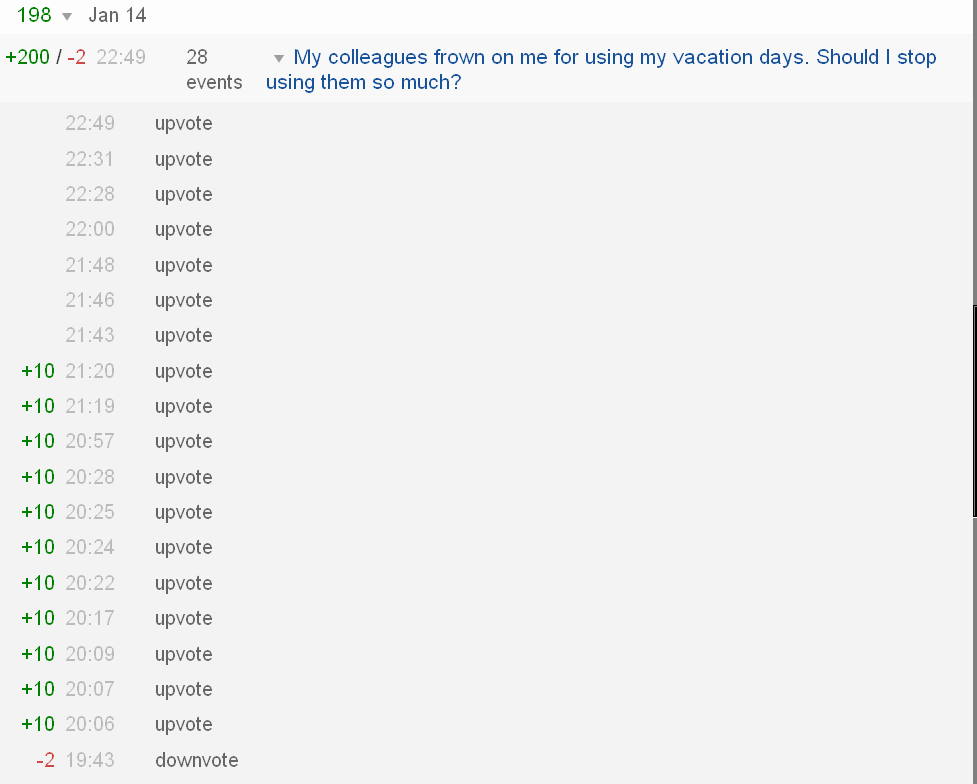 I believe this used to show 200 -- it's a number you tend to notice. :-) Also, my rep on that site mysteriously went down by 2 today (which is what prompted me to be looking at the history).

I'm not worried about 2 points one way or the other, but I'd like to know what happened.

That downvote was reversed on January 16, which caused all your events on the day where the original downvote occurred to be re-calculated. You have 20 votes there that earned you +10 reputation each. All is well.

The way the profile page is generated and the data it shows doesn't always tally up with how things occurred. Deletions of posts are particularly an issue. Perhaps this will get fixed one day.

The definitive place to audit your reputation is on the reputation audit page - for The Workplace that would be:

Not the answer you're looking for? Browse other questions tagged support daily-reputation-limit reputation-history .

268
How do I audit my reputation?
22
Why do the up-votes after reaching daily rep cap not contribute to compensate the subsequent down-votes?
58
Separate and visually indicate reversed events from the day's reputation changes

41
Only apply the rep cap to score from votes
3
Doesn't upvotes received after getting voted down the rep-cap yield any reputation?
3
Less than 10 rep for an upvote without hitting the reputation cap?
17
How does proposing a bounty affect the reputation cap?
6
Breaking Rep Limit - Possible?
3
How is the daily score cap calculated if a downvote occurs after max?
126
Revisiting the rep cap (yes, again)
34
Proposed change to downvote calculations for fairness by intent