My StackExchange network profile shows this: 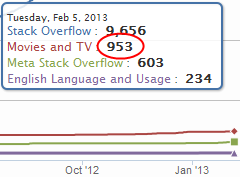 The header of the Movies and TV site shows this:

This difference has persisted for well over 6 months. I reported it back in August 2012 (where the numbers were 833 and 941, respectively. Consensus at that time was that it was a caching issue. I think the duration of the difference shows that there really is a mismatch somewhere. For me the rep (either way) is not an important issue, but if this reveals a bug somewhere it's at least good to know it exists, I guess.

Two day after rep recalculation as suggested by JoachimSauer below: no difference (other sites' statistics are updated).