The way duplicates are handled should be revamped. When a 3k+ user votes to close a question as a duplicate, instead of a "possible duplicate" comment or the new banner showing up, the system should automatically generate an answer containing the duplicate link.

The answer would be special in that:

This would not change the existing "vote to close" process. It would still take five 3k+ users's close votes to close the question as a duplicate. However, the whole community can cast a vote on the suggestion and hence express its agreement or disagreement with it. Every new dupe suggestion becomes an answer of its own, and can be discussed separately.

Clicking Confirm or upvoting as a 3k+ user automatically brings up the confirmation dialog containing the suggested dupe. There is no dupe-voting without having to actually check out the suggestion. This part of the process does not change.

This is cool for a plentitude of reasons:

There is a "lite" version of this request now: Create CW answer for every "Vote to close as duplicate" vote

I think this idea makes a lot more sense now that we're (sorta) mandating that duplicates be pointed only at answered questions. In my experience, it's often much easier to identify duplicates when the answer to the older one clearly fits the newer one. Obviously, there's always the danger that two completely different problems just happen to share a single solution - but that's even more reason to make duplicate links compete with actual answers to the new question.

That said, I have a couple of suggestions:

I have reservations about creating a link only answer to another question on the site. While it might be seen as special, it still looks like the system is saying "oh, this kind of answer is OK", when in reality, it's not.

It's a whole round of education that doesn't need to happen, IMO.

And while close votes and the confirm button are nice, there should just be one system. It all seems too noisy to try and figure out the duplicate.

The answer-but-isnt-an-answer-because-its-a-dupe-link is too confusing IMHO.

Either make it an answer, and copy the answer into the answer, or have a separate part (above/ below/ sideways) to display the duplicate link in.

People don't read, they skim or glance. Doing that at a link-only-dupe-link-that-looks-like-an-answer will, I believe, make some people think link-only-answers are acceptable again.

Additionally, isn't this only a small improvement over the "possible duplicate" comment? Users < 3k can vote on the comment, and >3k can act on it. Waffle's original suggestion of bringing in the question, not just linking to it made the duplicate more attractive and prominent; Shog's alternative (and therefore this feature-request) doesn't do this.

This is an awesome topic. Bettering duplication detection and handling is a place where headway can be made at a cheap cost.

That being said, I am hesitant to agree with all of this feature request. Overall, my rundown of the list is that

I like a lot of the direction in this post. Overall, I think having a preview of the answer at a duplicate post could be a good thing. It could also be bad so I think it is important to widely vet the implementation.

My two cents on implementing this feature are along these lines. This is just my opinion, so just assume "imo" is before these points because they are not set in stone for me

What that all boils down to can be seen in this image. As I only made this as a rough draft, it is not a real duplicate of the question and there are no close votes showing. I zoomed out a little so that the spacing and placement could be examined. 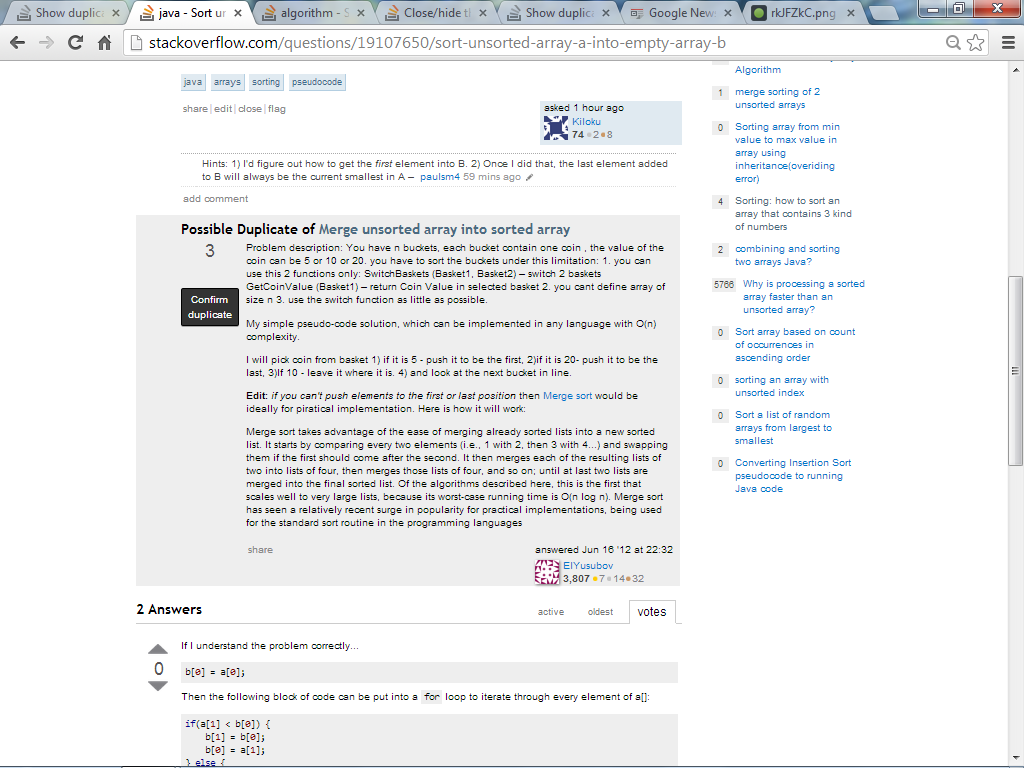 It should also stick to the top of the answer list, no matter what the sort order. I really like the idea of being able to leave comments specifically on the duplicateness of the linked-to question.

This is nice but hard to apply with the new updates.

As of now, whenever a user flags or closes a question for being a duplicate, the OP gets notified to either accept the other question(s) and close his/her question as duplicate or reject the questions and edit to explain why their question is not a duplicate. And of course, the auto-generated comment created from the first flagger/closer saying to the OP that the linked question might be exactly like what the OP wanted.

Of course, if we can, we could try to make Shog9's first idea into reality, accept it is added to the auto-generated comment:

Please read the answers there to find the solution to your question.

Not the answer you're looking for? Browse other questions tagged feature-request duplicate-questions .

852
Can we have the ability to retract a close vote before it closes?
992
Show all of my question/answers to me even if they are deleted
275
How should duplicate questions be handled?
446
Reward finding duplicate questions - +10, +2, -5
1245
Don't throw away all votes when a user is deleted
55
Improve UI flow for "close as duplicate"
418
Add an "I don't understand" option for review audits
346
New UI encourages askers to confirm or dispute duplicate votes
335
Gold tag-badge holders and moderators can now edit duplicate links