Diff removes a space when it shouldn't

This is a pathetic bug, I know, but each and every... The diff engine is removing a space here.

Screenshot of the infelicity for your delectation:

In the source there is no space:

and the diff engine thinks that the space has been added:

Some regex being a bit greedy?

Fixed in the next build.

So here's the problem. Before we diff a text, we have to split it into unbreakable tokens, which basically means words and punctuation (if we didn't do that, we'd end up with an unreadable character-by-character diff).

But between two words, there's usually a space. If we considered this space a token on its own, and you replaced one sentence with another, the diff engine would say "all these spaces haven't changed, so we'll show them as unchanged." Which unfortunately would give you something like this:

And you can imagine how unreadable this would be for longer sentences. That's why so far, we have considered the space after the word to be part of the token, so the diff engine doesn't see unchanged content interspersed with changed words. Thus we get this much more readable version:

Enter the next problem: With trailing spaces being part of the token, the fairly common edit of adding or removing punctuation suddenly looks like this:

because "bar " and "bar" are different. This diff is actually correct (removing a word and re-adding it is a valid representation of "no change"), but it isn't clear.

What we'd like such a diff to show is that "bar" wasn't changed. To solve this, when we compare two words, we "cheated" by telling the diff engine to consider them identical if the only difference is the trailing space.

This creates precisely the problem you noticed (note that the "code or not" in your diff is exactly this punctuation example). The diff engine is told that "bar " and "bar" are identical, and thus when outputting "here's an unchanged word", it'll just output one of the two (it thinks it doesn't matter which one). This works fine in the inline diff:

– while that's not 100% correct (since the space after the comma was not actually added), it's good enough to understand the diff.

In the side-by-side diff however (which didn't exist yet when our diff engine was created in its current form), this "cheating" is mercilessly visible:

So much for where the problem comes from. Now here's what I've changed: I realized that to solve the "add punctuation" problem without the cheating, while still solving the "unchanged spaces" problem, we just have to tie the preceding, not the trailing space to any particular word.

That way, you're comparing " bar" and " bar", and don't have to lie to the diff engine, causing problems along the way.

That's why from the next build on, you won't be seeing this anymore:

There we are again – comparing "Jeff" to " Jeff". Same problem, right? Kind of, but it's much more narrow: Trailing whitespace can differ much more often then leading whitespace; the only interesting case is at the beginning of a paragraph.

But hey: At the beginning of a paragraph, a browser won't render a space anyway. So if we just always make sure that the first word in a paragraph is preceded by a silent space, we solve this problem as well:

Note that this isn't 100% accurate either: the space after "and" should be green. But that's the only issue, and it doesn't hinder diff readability.

On a final note: I'm very aware that there are lots of edge cases that won't give you a perfect diff with this system. But that's fine. What we want is the usual text editing diffs to be easily readable. That's why "add a comma" should be easily understandble, but I don't care so much about "add the missing space after the comma" – because the latter is much less common. And even that one is correct:

In the revision history to Which ending should come if I kill all of the NPCs in Fallout: New Vegas?, the space between "Fallout" and "New Vegas" that appeared in the original post appears to disappear in the "before" column in the side-by-side diff view. In addition, the space between "endings" and the deleted "to come" in the body of the question also appears to be gone. 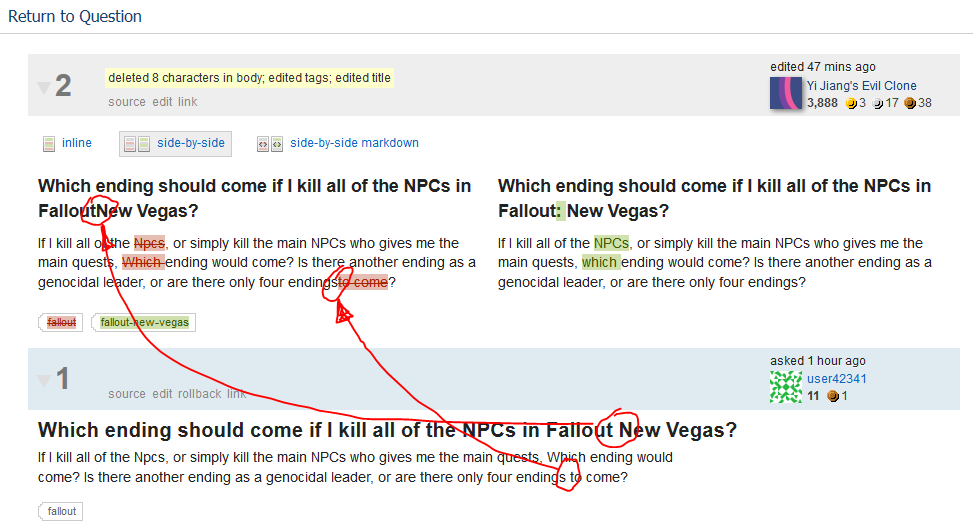 23
Suggested edit diff shows different results depending upon mode
16
Improve display of suggested edit deltas for format changes
11
Why do revision comparisons have an add and a delete even when only one is necessary?
4
Tag shows as deleted and re-inserted, even though I didn't edit it
1
More precise highlighting for diffs
5
The text change shown in the revision page is wrong

88
Free Vote-Based Advertising for Open Source Projects
2
Tabs don't show up in the edit suggestion markdown diff
114
Did You Know... that 10k users can see deleted comments?
8
MathJax is (inappropriately) parsed in Markdown diffs
584
We're switching to CommonMark
40
Anyone is able to see ♦ moderator announcements
216
Deprecating our mobile views