What am I supposed to do about "possible vandalism of own comments"?

I just checked the vandalism flag within the 10k tools and found: 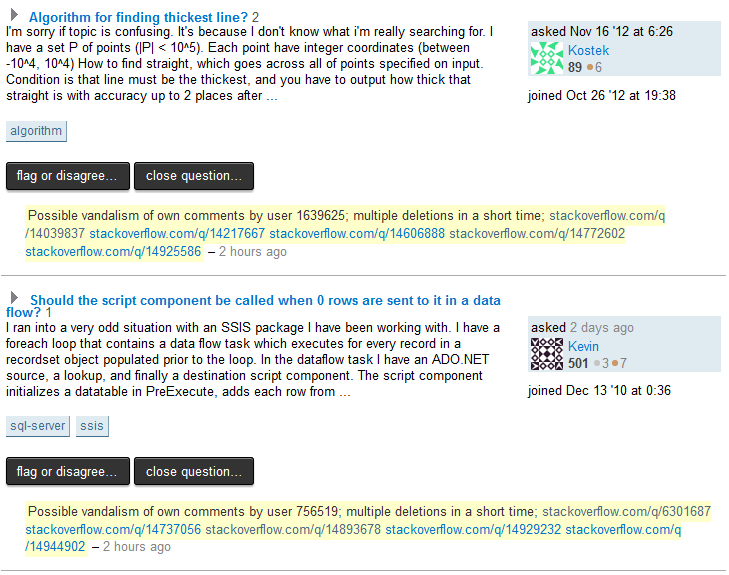 What am I supposed to do about these flags? As far as I can tell, I can't even see the deleted comments, so I have no clue how to proceed with these flags.

The FAQ and other questions talk about deletion of own posts, not comments.

That's a fantastic question... I'm not sure there's much point to this flag myself, nor have I seen it before. (Or at least I don't recall seeing it before.)

Moderators can't restore comments, so there's not much to do about the deletions themselves. The only thing to do that I can think of that could be done in response is checking to see if there are broken comment "threads" left behind as a result and cleaning them up if needed.

Shog9 and I looked at a bunch of deleted comments, users who deleted them, and the circumstances of the deletions (e.g. does deleting a bunch of comments likely point to a rage-quit in progress?), and we're gonna make some changes to how this flag works. It's only going to be raised when a user deletes old upvoted comments on 20 posts, and we're not going to show it in the 10k flag queue.

The guidance of handling it expands a bit: check the threads left behind (within reason, since there will be 20 of them), but also keep an eye out on somebody trying to take their ball and go home by deleting actually valuable and informative comments.

This is what I do:

I never knew that my actions were termed as vandalism. I apologize for that. I feel that comments are noise. That's my personal opinion. I could be definitely wrong. I always feel that the questions or answers should be made more clearer than adding unnecessary comments.

Not the answer you're looking for? Browse other questions tagged discussion comments flags moderator-tools 10k-tools .

632
Are answers that just contain links elsewhere really "good answers"?
200
How do comments work?
222
What does the helpful flag mean?
127
Let's get rid of the 10K flag queue
2782
A Terms of Service update restricting companies that scrape your profile information without your permission
93
Community deletion of comments should raise a moderator flag
381
If you're gonna talk Politics, you must respect those who disagree
418
Can a machine be taught to flag spam automatically?
2478
Firing mods and forced relicensing: is Stack Exchange still interested in cooperating with the community?