How can we encourage small beta sites to grow?

There are a number of sites which just don't have any activity to speak of. I think there needs to be a more consistent policy about what we should do to encourage them to grow, and kill them if they are dead. What can we do to help encourage those sites to flourish?

I'm a moderator on a beta site that has languished in beta for almost two years.

We've tried quite a few different things to boost our participation levels (at this point, I think our stats have been consistently good... with the exception of questions/day, which has hovered at around 10% of the "healthy" target for months).

At this point, I feel I can confidently say that there is nothing the larger SE community can do to help "boost" a beta site that will be effective in the long term, aside from giving the site's community time enough to explore what works and what doesn't work.

Which is exactly what is happening where you see sites that appear to be "dead".

The success of a beta site has to come from within. It has to have not only a solid core of users, but a clear understanding of its own identity, through scope definitions, policy, tagging practices, and other meta discussions.

No amount of outside help can fix it if the community hasn't been able to accomplish that on its own.

The only realistic thing StackExchange can be doing for these beta sites that I can think of is to get the word out to the public that they exist, and they do exactly that.

Jon Ericson's answer points out a spike of activity in November for Library and Information Sciences. I don't participate there, but I am willing to bet I know what happened: a good question likely got promoted by SE on twitter/G+, etc.. The reason I expect that to be true is because we've seen similar surges of activity on parenting.se when a good question gets tweeted (such as my recent question on letting toddlers win, if you'll forgive me for the self-promotion).

Which comes back to the main point: the community needs to provide a continuing flow of quality content in order to have the SE team succeed with promotion.

So the best thing you can do to help these sites flourish is ask good questions, and then stick around even after you've gotten your good answers.

This is an absolutely terrible idea. The last thing that any community needs is some self-righteous "Stack Exchange citizen" to complain that they suck without ever bothering to participate. Before I get to making my point, let me illustrate why I get pissed off by people like you — you have 0 votes cast and only 1 answer that was migrated from Signal Processing on Cognitive Science and more importantly, not seen since March 6 2012! and yet you claim to be knowledgable enough to say that the "site needs probation"?

If a site has a problem (and lot of sites do) —

In other words, involve the folks participating in the actual community instead of a bunch of Stack Overflow meta heads.

I don't object to the fact that some sites just don't have enough momentum and need to be culled at some point. Sometimes an outside perspective might help, but I see nothing of merit in your post other than smugly saying "I think these sites suck and so they should be killed".

Allow me to introduce you to Libraries & Information Science: 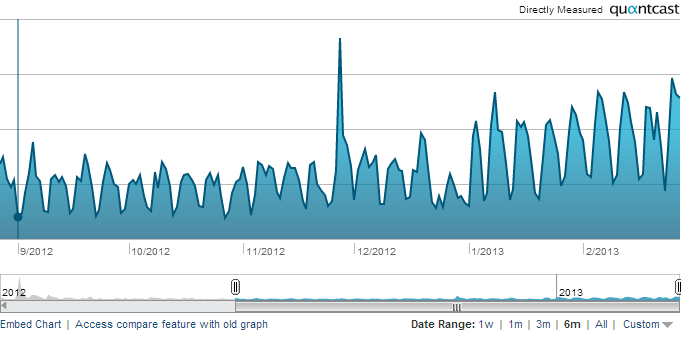 I've never visited the site myself and have no particular need to ask or answer questions there. (I do love libraries, but that's not really the point.) The above chart (visits per day for the last half year) comes from Quantcast, which has similar information about every site on the network. I'd like to draw your attention to a few details:

It can be helpful to think of each site as a mini-startup. The first thing you need to do is make sure that you've got some market you can serve. Area 51 and the Community Managers do a pretty good job of ensuring that a site at least starts out with a vision of what sort of users it will attract. If you have regular users who care enough about the site to visit it week after week, you probably have found yourself a niche. For the chart above, I would guess that L&IS has found its place in the world.

The next step is to figure out how the site might grow. In business, it's possible your niche is too small (the old refrigerator salesman in Alaska gag). But on Stack Exchange, it's more likely that the segment of the market you are pursuing doesn't know about the site yet. This is doubly true if the site's subject is not particularly related to programming. Spikes in visits, such as what happened in the end of November on L&IS, signal that there is an untapped market waiting to be introduced to your site. If you turn up in search results or get mentioned by movers and shakers or get in the news, you might find visitors coming out of the woodwork.

Probably the most important step is to convince new users to stick around. Sites grow when the number of incoming users exceeds the number of outgoing (or rather not-returning) users. Maybe you saw a bunch of people turn up for the hat contest and then disappear. That would be a sign that you are doing a poor job of retention. You won't capture everyone who shows up on your doorstep, but a healthy site will find new users who quickly turn into site enthusiasts. Perhaps the best way to achieve this is by filling your niche well. (See above.)

The specific details can be worked out later, but in general, I believe this will help a site's users to realize that a site they value is in trouble, and they need to help more if they wish to keep it as a resource.

There is a critical mass required for a site to grow, and any help they can get to grow the quantity of users will correlate to the probability of them making it long term.

Not the answer you're looking for? Browse other questions tagged discussion beta-phase activity .

15
Getting a clear picture on Area 51 beta statistics

1491
Fastest Gun in the West Problem
1840
Could we please be a bit nicer to new users?
724
Your answer is in another castle: when is an answer not an answer?
2788
A Terms of Service update restricting companies that scrape your profile information without your permission
827
Net Neutrality and Stack Overflow / Stack Exchange
494
Congratulations to our 29 oldest beta sites - They're now no longer beta!
2502
Firing mods and forced relicensing: is Stack Exchange still interested in cooperating with the community?
2253
Stack Overflow is doing me ongoing harm; it's time to fix it!