Over on Arqade we've had a meta discussion recently regarding the inclusion of game names in question titles due to an issue where the 'Questions that may already have your answer' suggestions when raising a new question causing confusion. Take a look at this screenshot below; 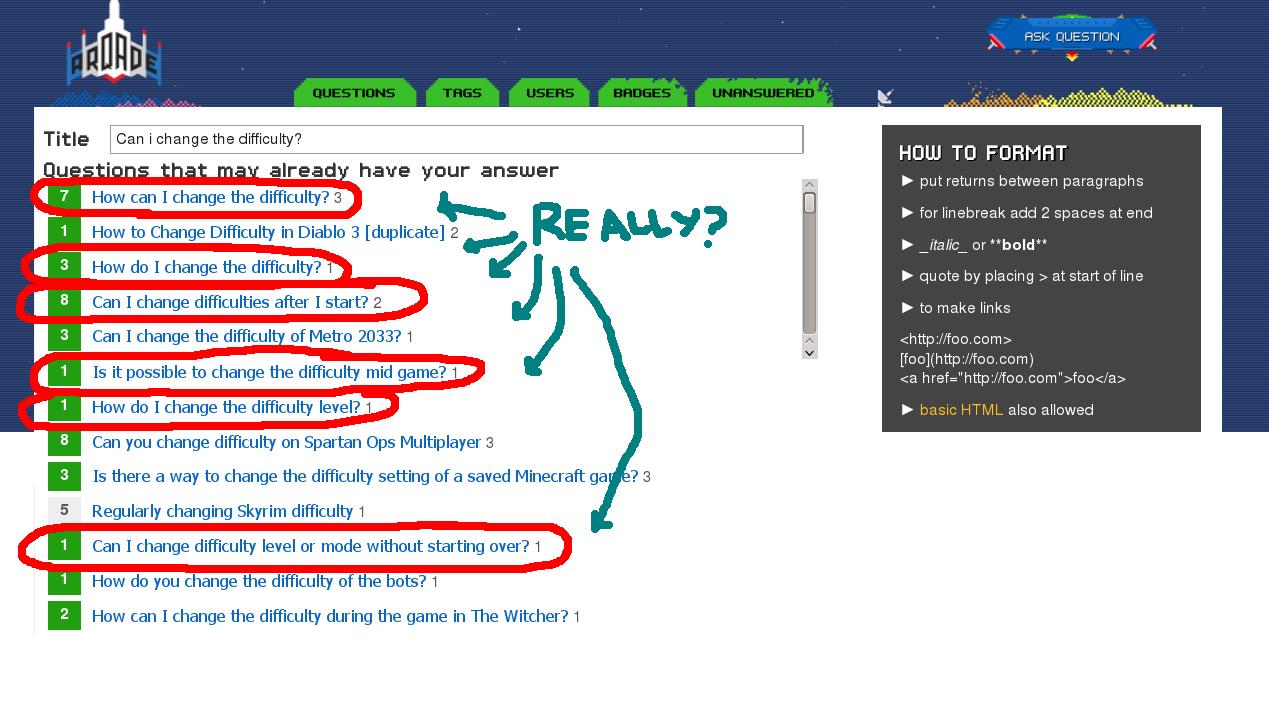 As a possible resolution to this issue, would it be possible for an option to be added that would show the tags that a question is tagged with in the suggested questions list?

Are there any other possible solutions that could alleviate this problem?

We had a round-up yesterday and discussed this feature and for now have decided that this isn't currently feasible, not without an epiphany of design.

The ideal incarnation is that we essentially treat this the same way we handle the <title> attribute, steal the top tag on the question as long as it isn't organically in the title. But then we ran into some problems on how to render this safely.

If we show it in the actual appearance of a tag, the UI gets pretty clunky and any titles that do not have visible tags will make the entire thing look like a mess of everything thrown at people's face.

If we show it as plaintext, then while the appearance is pretty smooth between tagged and not-tagged, therein lies the problem that users, especially new users, won't be able to tell the difference. Which means, that from their perspective, writing titles like starcraft2 - How do I change the difficulty is a proper course of action. While this disambiguates for your ambiguous titles, when someone asks a not-so-ambiguous question and is presented with a list that all have these prefix tag texts, there's no discouragement or easily explained difference between these titles and the actually normal titles.

For now, this request is on hold - we think the use case is pretty solid but we're thinking on a way to implement this that won't cause more harm-than-good by encouraging improper titles with tag prefixes or suffixes.

I'd like to take this moment to remind people, though. Including tags in the title organically has always and will always be acceptable and is very much encouraged, especially in cases where a title can be ambiguous. During the internal round up, and as well as with cyclic chats I have across the network, I always hear "You should never include tags in the title, they should always be in the tag section and maybe the question body", and some people even assert that this is what we recommend and as well head and edit them out of titles where they are legitimately used. We don't recommend this.

People shouldn't include tags in the title in clunky, offset means. This would be things like <tag> - question or question (tag) or [tag] question. It is acceptable to write things like "How do I do X in [tag]", or "Using [tag], how can I do Y". Those are part of the same sentence that the actual title is, and why we refer to this as "organically including the tag". It's part of the same being, and it helps in a lot of things. It makes search (Google and otherwise) stronger, it includes important data that tells people what your question is about, and most of all it helps avoid ambiguity.

So please don't remove tags that are properly included in the title. If someone starts an editing spree to do this, stop them. And when you ask your own questions, consider noting the important things, like the game title when you're in Arqade.

I think this is an issue that requires site-specific modifications. The importance of tags varies a lot across different SE sites.

On Gaming, the main tag is extremely important, as it tells us which game the whole question is about. We generally have only one tag in most cases, and it is the name of the game. Restricting the suggested duplicates to questions with the same major tag makes a lot of sense on Gaming.

But this is not a solution that would fit to all sites, many sites have far more complicates and ambiguous tagging schemes, excluding questions on the base of tags would be dangerous there. This should be a per-site configuration option.

Not the answer you're looking for? Browse other questions tagged feature-request status-deferred tags asking-questions .