Community ♦ is a review monkey too?

This review was recently reviewed by the Community ♦ user and accepted. I thought this edit may have been a honey-pot but it wasn't.

I think Community needs a bit of time in the naughty corner.... if it wasn't for the user strah correcting it then we would have one ugly looking question on our hands.

Should the Community ♦ user be making decisions like this? Can it be improved? 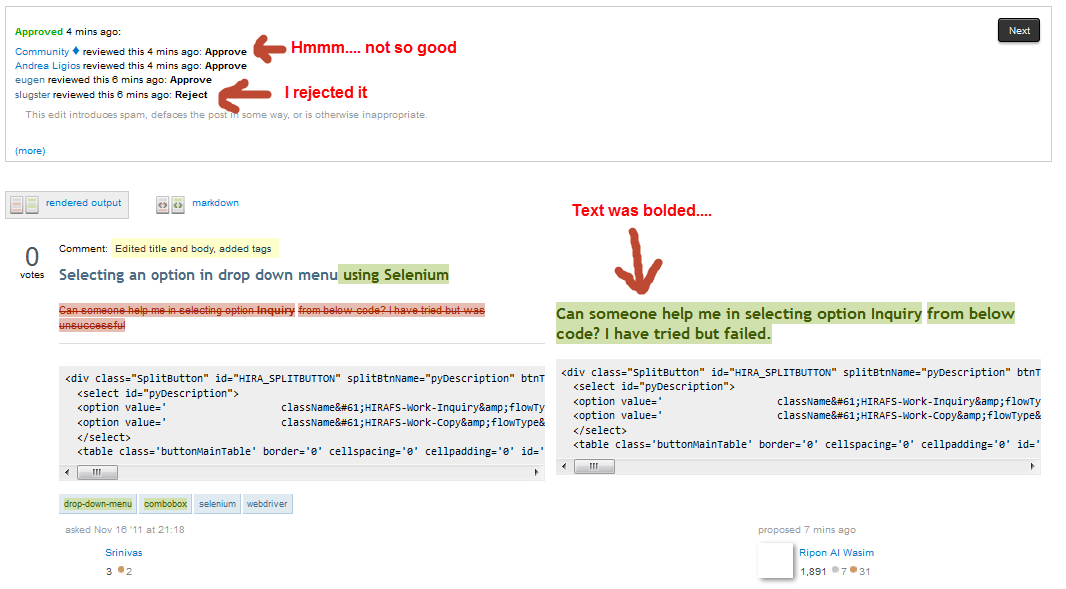 Strah choose to improve the suggested edit but left the 'helpful' checkbox checked. I'll be charitable and suggest that that was accidental. However, he did so outside of the review queue, using the edit (1) link directly on the question itself instead.

Community is attributed 'helpful' accepts (example 1, 2), just as it is attributed 'not helpful' rejections. This is not always the case, like this edit for example, was also improved by Strah, and it is simply marked as approved. Community was not involved there; I think because the post was edited by a 3rd party between suggestion and review action there.

Normally, when done through the review queue, such improvements also are recorded as a review action; 'Edit' in this case. But because the edit was made outside of the queue, the only record of this is the approval attributed to Community, and the 'improved' edit by Strah in the post revision history.

Not the answer you're looking for? Browse other questions tagged discussion bug status-bydesign review community-user .

14
Take the diamond away from Community ♦
122
Give Community ♦ a review ban
5
Who runs "Community♦" on the review queue?

305
How do suggested edits work?
43
Review trap shows post that was bad, after it has been edited
122
Give Community ♦ a review ban
2510
Firing mods and forced relicensing: is Stack Exchange still interested in cooperating with the community?
986
Firing Community Managers: Stack Exchange is not interested in cooperating with the community, is it?
554
The company’s commitment to rebuilding the relationship with you, our community
155
Improving the Review Queues - Project overview
229
Improved experience for users with review suspensions
241
Review queue workflows - Final release