Date ranges for positions held on Careers profile are too restrictive?

Perhaps I'm in a small minority, but I find the date range selection for a position in the "experience" section of my Careers profile very restrictive.

For example, I'm currently finishing up my (bachelor's) degree, and I completed three internships along the way. The two most recent took place in 2012, but were not contiguous -- I'd be lying if I said I worked from January 2012 to December 2012, since I actually worked from January 2012 to April 2012 and then September 2012 to December 2012 (I should add it was on the same team/project, with the same title). There's no built-in option for this edge case. Cases like this also come up for seasonal work, recurring summer jobs, on/off part-time positions, etc.

I understand that letting users put any set of dates and formatting they like makes it very hard to properly sort things (for the "most recently" blurb), but since users are allowed to override the sorting anyway, wouldn't it be possible to add a "custom" free-text date option (perhaps length-limited to ensure it fits in the design)?

I've settled for putting "2012-2012", which is passable, but plain "2012" would be better (I know if I leave either "from" or "to" blank I can achieve this, but then the "most recently" blurb doesn't pick it up), with a custom plain-text range being my ultimate preferred option.

I guess I don't really have a question, but rather wanted to raise awareness of this problem and see if it's bothering anyone else (and therefore worth fixing).

The only yearly restrictive dates are for Education. If you add your internships to the experience section, you will also have the option to specify the months. 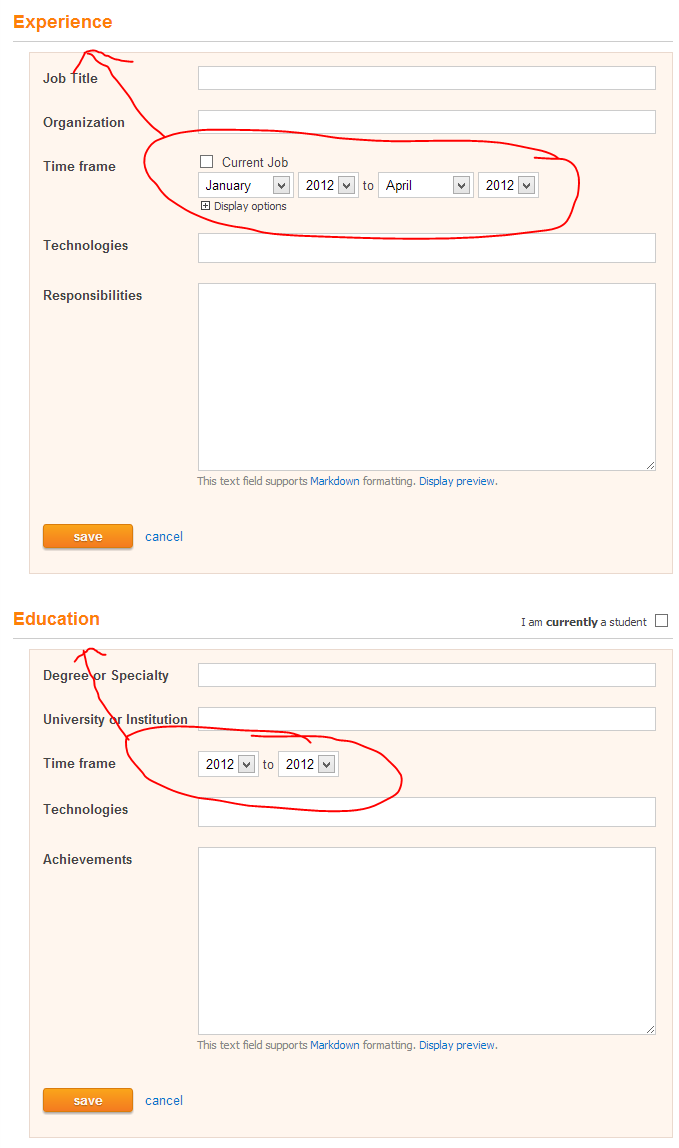 Not the answer you're looking for? Browse other questions tagged discussion careers dates .

1003
Are there any clones/alternatives for running a Stack Exchange style Q&A site?
239
Can we prevent some of the low-quality questions from entering our system?
13
Can't provide future education date on Careers
319
Stack Overflow is getting a Meta of its own
310
Operation 'Split, All The Metas!' Shall Commence On April 16, 2014
8
Please use proper en-dashes for ranges in SO Careers
226
Custom question lists: finding questions you can answer
414
Goodbye and thank you, Jaydles!
327
Let's take a look at the interaction between staff and the “power users” of the network