On this question, I'm seeing bananas in two of the comments: 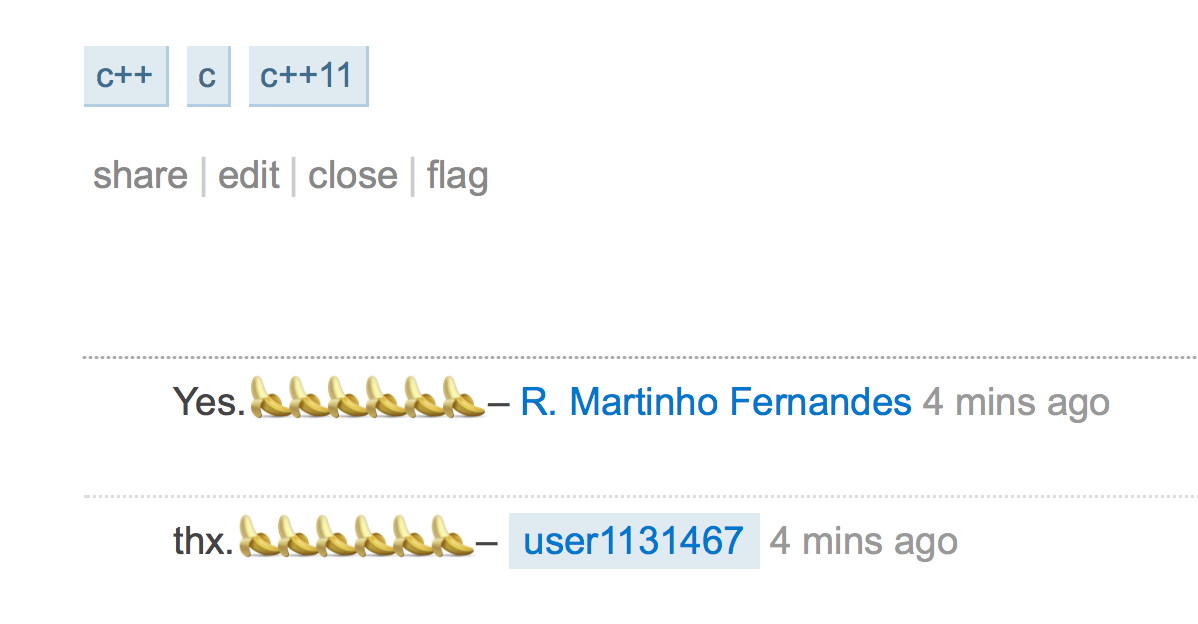 Am I going bananas?

discussion comments
Share
Improve this question
edited May 23 '17 at 12:36

Those are instances of U+1F34C ʙᴀɴᴀɴᴀ. I use them as a filler in comments. I used to use U+2063 ɪɴᴠɪsɪʙʟᴇ sᴇᴘᴀʀᴀᴛᴏʀ, but since some people complained they were seeing the invisible separators as squares, I switched to bananas. They also have the advantage of being represented in UTF-16 as surrogate pairs, and thus each counts as 2 for the 15-char limit.

They look like this on my system (Windows 7, Firefox):

Mac OS ships with some fonts with Apple extensions to OpenType that allow the use of colours in glyphs, and that's why you see them flashy like that.

It's shorthand for "flag this comment as noise so that it can be removed".

The banana itself is a reference to a famous theorem.

Not the answer you're looking for? Browse other questions tagged discussion comments .

188
Allow ex-moderators to opt-in to having a mark on their profile indicating they were a moderator
189
How do comments work?
31
Do we have a policy on smileys? :)
3
Enforcing a question minimum character length?
4
Comments with lone surrogates behave unexpectedly
3
Total upvotes and downvotes
1
Bypassing minimum comment length with Soft hyphen - (ALT + 0173)
-3
Comments don't count characters correctly

1174
Encouraging people to explain downvotes
1077
Are there any clones/alternatives for running a Stack Exchange style Q&A site?
339
Allow downvoting comments
901
Why aren't people voting for questions?
1440
Fastest Gun in the West Problem
1748
What is the XY problem?
421
Add data.SE style “magic links” to comments
2777
A Terms of Service update restricting companies that scrape your profile information without your permission
2426
Firing mods and forced relicensing: is Stack Exchange still interested in cooperating with the community?
2092
Stack Overflow is doing me ongoing harm; it's time to fix it!