What can we do about all the reoccurring spam?

This last blast we had was really huge, it lasted almost the whole day. See: http://i.stack.imgur.com/OXvpc.jpg

I have noticed across SE we are getting a lot of spam, usually titled "WATCH BLAH BLAH BLAH HERE".

It is very repetitive, regularly coming in the later afternoon/early evening (pacific time) a few times a week. This is starting to become a problem (on Ask Ubuntu at least) because this spam comes right when things start to slow down in the evening. The spam has actually stayed long enough, that when I check review in the morning I've seen it in in first posts.

What can we do to

Several thoughts on the subject:

It doesn't appear to be a bot, unless it's a very smart bot. I've seen the "OP" of these spam posts edit them and he once even posted an actual question about this "movie" and added legitimate answers. 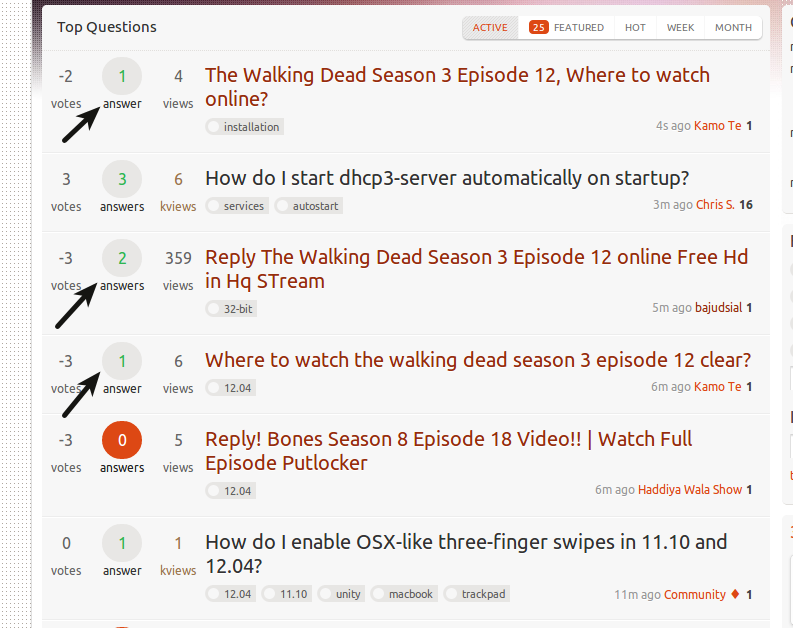 As you can see in the one below, he asks where he can watch this movie, and then adds spam answers with links. 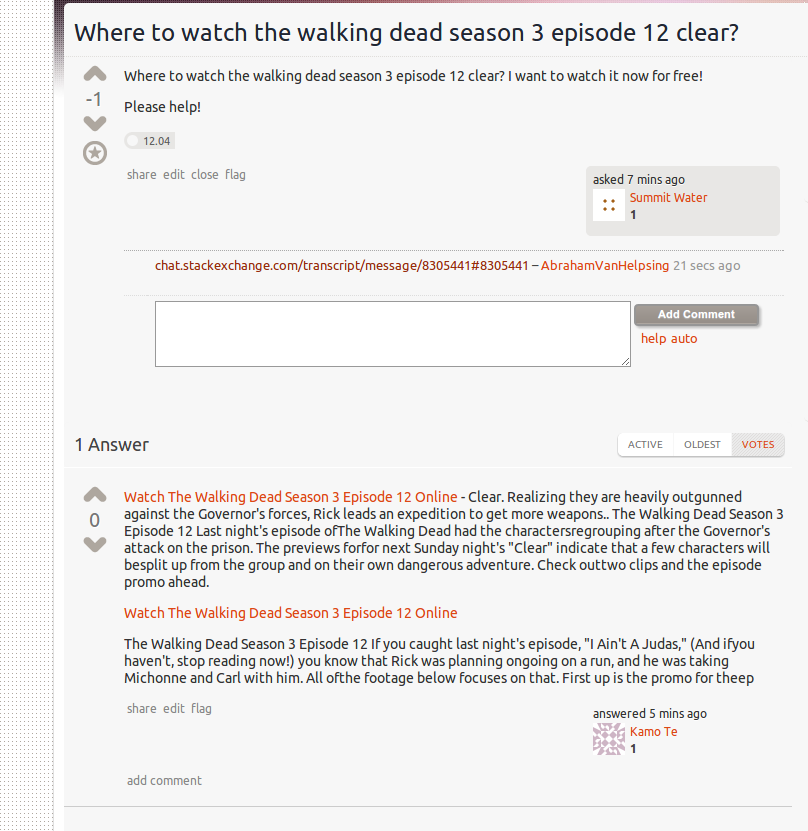 He can be pretty steady too, flooding the front page with these.

Thoughts based on comments

Well some more spam came around this evening (It's actually still there... waiting for a mod). The spammers got even trickier, adding tons of whitespace and <br> tags, making the post so long it hid the flag button. I almost didn't figure it out, but I had read a post (I think it was here on meta) about this and quickly figured it out.

Help prevent this spam in the first place?

There's not much that can be done, honestly. Spammers will spam. IP address blacklists/bans aren't particularly useful because the IP address used by spammers are a huge range & varies a lot. This is leads to a whack-a-mole contest & you end up blocking a lot of legitimate users.

Make sure it gets deleted faster?

Building on your question:

The system does work when it is used the way it was made to be used. But it isn't

Currently (if every downvote counts as a flag) we'd have most of this spam out the door pretty quick.

But we don't The last bit of spam we had (finally) got taken care of, after 9 and 11 downvotes respectively. It should have been gone a long time before that.

What do I think the main problem is?

Obviously if a question gets a score of -11 before it's deleted, not enough users are using their flags. This leads to us wondering, do new user know they can flag?

I'm not sure how to find out what users have chat accounts, but I haven't seen many of these new users in chat. They certainly don't come there often, nor do they usually talk when they do come.

Since our two main methods of communicating with users don't seem to be all that effective, we don't have many options when it comes to educating users.

I've done this a couple of times and it seemed to help get the spam deleted faster.

This is a good idea because it gets your question into the community bulletin for a while (one week?) and hopefully most users will see it and read it.

There doesn't appear to be much else we can do, as long as we do our part and flag.

I've started adding comments on spam along the lines of:

Attention viewers! Please help get this spam deleted by flagging it. Click "flag" and choose "it is spam". Thanks!

And the spam has gotten deleted a lot faster. Seeing as spam usually gets 4 downvotes fairly quickly, that seems to show that most viewers have taken action upon seeing the comment.

Okay, after this last blast of spam (which I only caught the tail end of) I've come to the conclusion:

We shouldn't have to do this

Yes a little spam doesn't hurt anyone. It's actually kinda fun to have a little spam once in a while.. But this is getting to be too much. We shouldn't have to be always watching and waiting for spam, hoping a moderator is around and coordinating spam flags in chat.

The thing is 13 hours later we were still getting a spam question every 5/10 minutes.

Blacklisting links does happen, but it has to be done manually by a Stack Exchange employee with sufficient privileges. IP blacklisting is also technically possible, but rarely effective as spammers often share the same IP ranges as legitimate users.

As an ordinary user, there are two things you should do when you see a spam flood:

OK, spam happens. It happens on Stack Exchange, it happens on unmoderated forums, it happens on Twitter, it just happens. Provided one person in every million clicks a link then it's worth the effort for the spammers to keep trying. Spam itself is not going to go away in the near future. So, having said that:

What can we do to help prevent this spam in the first place?

The best option here is to make Stack Exchange sites not worth the effort of posting spam to. If spam posts get deleted quickly and no clickthroughs occur then in theory the spammers won't bother. It takes time (albeit not much) to sign up to a site and start posting stuff to it, so if there is no benefit to doing so spammers should stay away.

So, how can we do this then? What makes it un-attractive to post to? Well if their spam messages don't stick around long enough to be used by anyone, then that's a start. Yes, this won't stop brand new spammers from starting up, but if we can frustrate the spammers when they come to post their second, third or forth post then we reduce the chances of repeat offenses.

Yes, I've not given a useful answer to your questions yet, but I'm coming onto that. Picking up your second question:

Make sure it gets deleted faster?

Well, I propose that we put more control into the hands of the users of the site. There is already some algorithms in place around flagging - if you flag incorrectly you get punished and can't flag again for a period of time, but aside from a few badges there is no individual benefits to flagging posts, so why not do something here? I propose the following:

Users of a certain reputation and with a good flag value (say, 3000 rep as that's when you can cast close votes, but maybe higher and a Helpful flag rating of 90% or so) should have a higher weight to their flag casting than, say, a new user who hasn't flagged many posts at all.

This idea should work well because the larger the site the more attractive it is for spammers, but that also means there will be more higher rep users on those sites to be available to deal with this issue.

Then, once a spam post has been deleted, alert the mods to the post so they can deal with the spam poster when they are available.

Notice that most, if not all, of the spam has the same theme: "Watch this episode", "watch that event", "where can I watch that show?", and so on. For now, a good solution may be to improve the quality filters to reject questions like these, especially if they're off-topic on a Stack Exchange site like Ask Ubuntu.

Most of the posts I downvote are just that, posts that could be changed to show more effort and eventually salvaged into decent questions/answers. I haven't run across this on SO (the SE I frequent), but I think this is something for "flagging". I see they have a lot of downvotes, but I think someone who was downvoting should have flagged it for a mod. Correct me if I am wrong, but those posts seem like the prime example of a flag for a moderator allowing for swift justice without too much hassle/work.

If I saw this amount of spam consistently I would flag all those posts. Is that sustainable in the long run or does that just overburden the mods, I am not sure (not a mod, don't know how much traffic they get).

Very few of these posts get more than 5-6 downvotes, and almost never get enough flags to disappear on their own, meaning they can be around for a long time.

Perhaps a badge would mitigate this issue? What if down-voting a question/answer which gets flagged as spam by another user granted a badge? That might encourage users to down-vote posts they suspect other community members will consider spam.

12
Is there a better way to permanently stop the spam questions?
24
Spam flagging on-topic answers

1902
What is the XY problem?
110
Auto-delete/destroy 1 rep user when their post is deleted as spam
43
Join the crusade against router-switch.com Content Spam
730
Your answer is in another castle: when is an answer not an answer?
325
Toward a philosophy of Chat
2794
A Terms of Service update restricting companies that scrape your profile information without your permission
422
Can a machine be taught to flag spam automatically?
173
A machine can flag spam automatically. Can it do better?
2516
Firing mods and forced relicensing: is Stack Exchange still interested in cooperating with the community?
761
New Feature: Table Support