I have come across a question which looks like it would be better suited for CodeReview, and so went to flag it as such, but after clicking "it doesn't belong here, or it is a duplicate" and "off topic," I get the following. 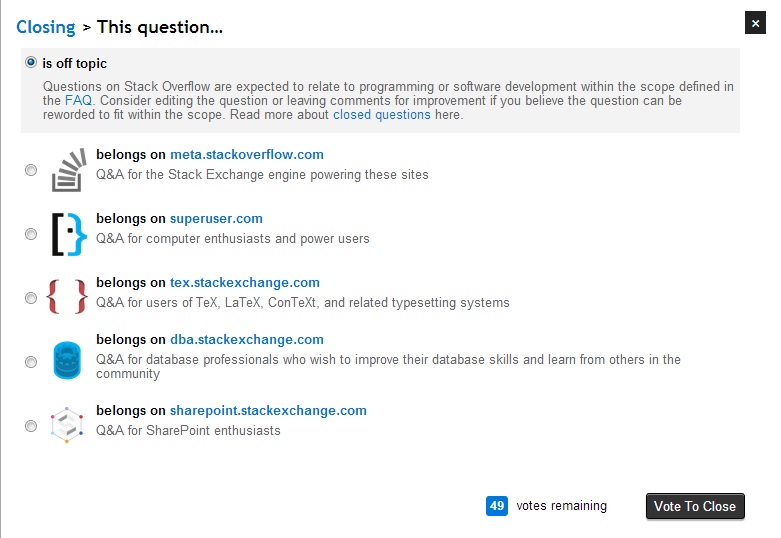 I think the question is more suited to Code-Review than any of the sites listed, but there doesn't seem to be an option to flag the question as "belongs on CodeReview." I am sure there is a good reason for this, and am curious to know what it is.

Flag it for moderation attention.
Keep in mind that moderators cannot migrate too old questions, and that a bad question is generally not migrated. Also, if a question suits two different sites, it is generally migrated if the OP asks for it, not when another user asks for its migration.

It's not always beneficial to have other sites show up in the list. A prime example is Programmers, which used to be on the list for migration from StackOverflow but no longer is. As I understand it, lots of people on SO would mark questions for migration to Programmers because they were off topic for SO but still seemed related to programming. Understandable, but Programmers isn't just a catch-all for everything that contains the word "computer" and isn't appropriate for SO, and the volume of incorrect migrations was becoming a problem, so they removed Programmers from the list.

You can still get questions migrated to Programmers, of course; there's just not an automatic way to suggest that. Instead, flag the question and add a message to the moderator suggesting the migration. It'd probably make things a little easier on the mods if you add a quick explanation of why the question is appropriate for Programmers. Same goes for other sites like Code Review.

60
When voting to migrate an off-topic question, why is the list of sites limited?
1
How do I flag a question as being on the wrong site when the correct site is not one of the flag options?

1802
Could we please be a bit nicer to new users?
532
The current review system encourages fake reviews; some people upvote everything rather than actually fixing problems
258
Closing changes: [on hold], unclear, too broad, opinion-based, off-topic reasons, bye-bye to Too Localized
692
Your answer is in another castle: when is an answer not an answer?
375
Updating the Hot Network Questions List - now with a bit more network and a little less “hotness”!
2433
Firing mods and forced relicensing: is Stack Exchange still interested in cooperating with the community?
482
To reach out: on Monica, the Lavender community, and the future of the Stack Exchange network
578
We're switching to CommonMark
721
New Feature: Table Support