Do we have a problem with follow-through on close votes? [closed]

Ask Question
Asked 8 years, 1 month ago
Active 7 years, 5 months ago
Viewed 331 times
17
Closed. This question is off-topic. It is not currently accepting answers.

I've been looking at the review queues lately, and something has caught my eye. The close vote queue just keeps growing. It hit 50k just a little ago, and is well on its way to 51. I've never actually seen it go down. Do we have a problem with a huge influx of close votes, but no actual closes?

I thought I'd try and get some data, but I'm not aware of a way to see the full history of reviews, short of scraping the 11000-odd pages on the History tab... Here's a plot that for each day shows the ratio of number of posts that received their first close vote (and still remain unclosed now) versus the number of posts that were closed. These are raw data from the Explorer. I don't think there's a way to determine which of the posts that have pending close votes have left the review queue. 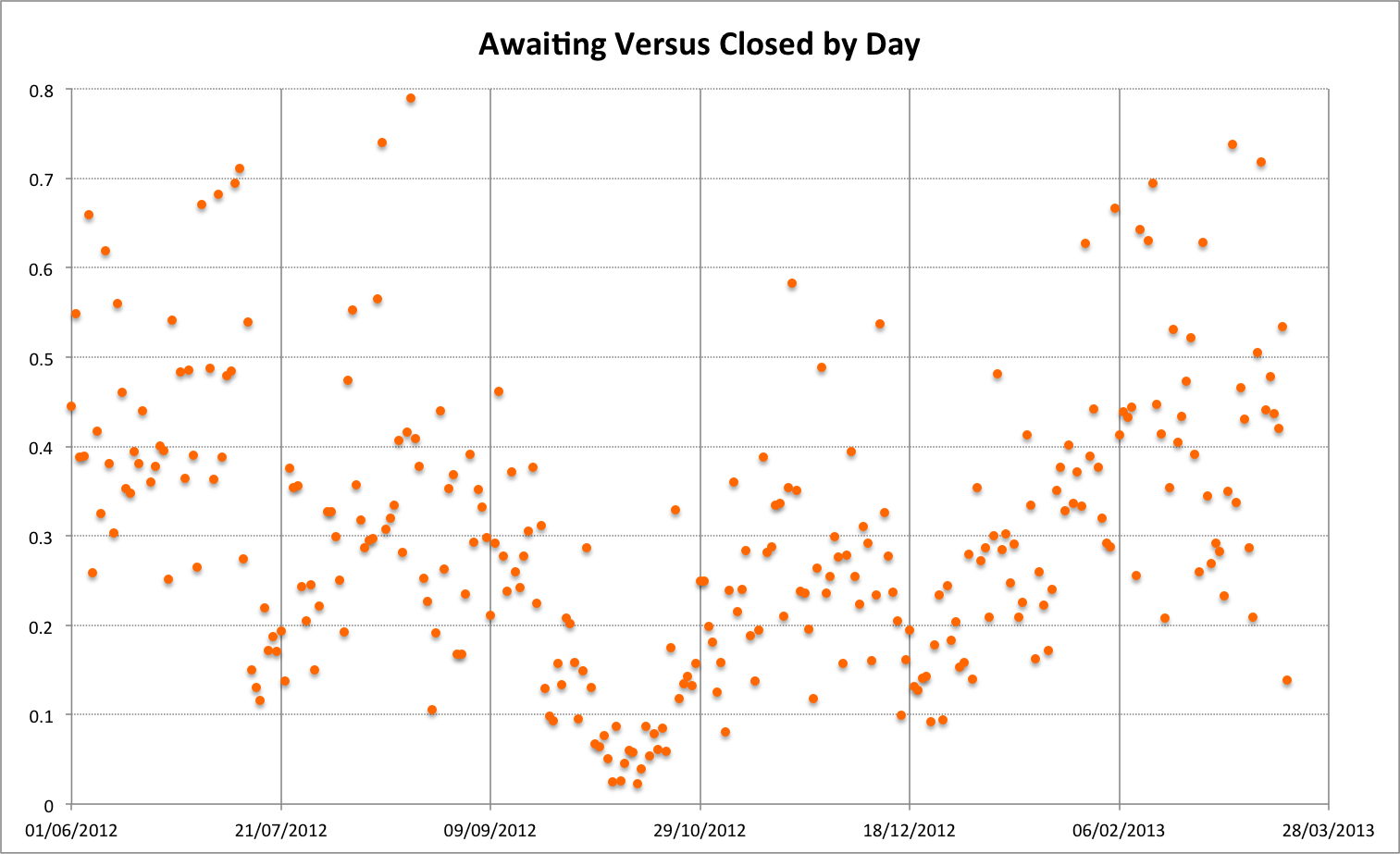 I'm not sure you can read much in to this, but it does look like the balance is shifting back to where it was in the middle of last year. The low point in October appears to coincide with the end of the time when some reviewers were 'processing' over 100 items per day from the Close queue. There's another dip in the winter holiday season. The July dip is coincident with the earliest reviews visible in the history tab - that may be a real coincidence though.

The 50K outstanding seems like a large number, but it's around 1% of the total. There are only about 210K posts in total showing with non-null Close dates in the Data Explorer, of these 87K have Close votes visible - it appears the data are not complete. About a quarter of the closed questions have fewer than five votes, which suggests that mod intervention was involved in those closures.

To me it seems all too tempting to rush and process the 'backlog' quickly, rather than accurately, and this certainly was happening back in October. Many of the items in the backlog would, if posted now, be closed quite quickly. There are probably a significant number of old posts that are as worthy of closure, but just don't get the attention.

One observation on the rate limiting as it stands: If I review 40 items in the queue, and use my remaining 10 votes to add new items to the queue, I've at best made no impact that day on the total number of reviews 'outstanding'. The ten items I added will likely need 40 review actions by others.

534
How about a “Vote not to close” option to counter the “Vote to close”?
57
Daily close votes queue limit
29
Ideas for the close queue?
43
Increase close votes in /review
27
Strongly separate duplicates from “the rest” in close votes review queue
46
Allow us to access a post's Reviews directly from the post itself?

848
Can we have the ability to retract a close vote before it closes?
330
Distinguish close votes by reason
27
Strongly separate duplicates from “the rest” in close votes review queue
183
Every “close” has its thorn: replace “close” with “on hold” for the first five days
103
Age close votes after 14 days, regardless of views, allowing recasting