When reviewing suggested edits, show the number and/or reasons of rejected votes

(This question is similar to a previous question of mine, but that question was specific to tag wiki reviews, and the question has morphed and gone all chameleon since I last asked it)

When reviewing Suggested Edits, I would like to be able to see:

To me, each and every edit should improve a question or answer; if someone feels that the suggested edit should be rejected, I would like to know that when reviewing the edit. This would be of especially great joy to me, since I feel I'm often the first to reject as "Copied Content", only to see the next three votes approve the edit. Blah!

We've done a great job of blocking robo-approvers, and I think this would be a good next step to people who can spot review audits, but still approve questionable/minor/copied/just-plain-crap edits.

Swapping the positions of you and others doesn't change anything.

From your question I understand that you want to be able to communicate your reason for rejecting to others so that they don't miss what you see. That's just another angle on influencing votes, but perhaps it's a legitimate kind of influence. A point in your favor is that we already have this for close votes. If one is okay and not the other, we should have a clear understanding of why that is.

If we get to know if the edit has been rejected by someone else earlier it can influence our judgement of the edit. So, its generally a bad thing to show on the face of the edit if it has been accepted/rejected earlier by another reviewer. 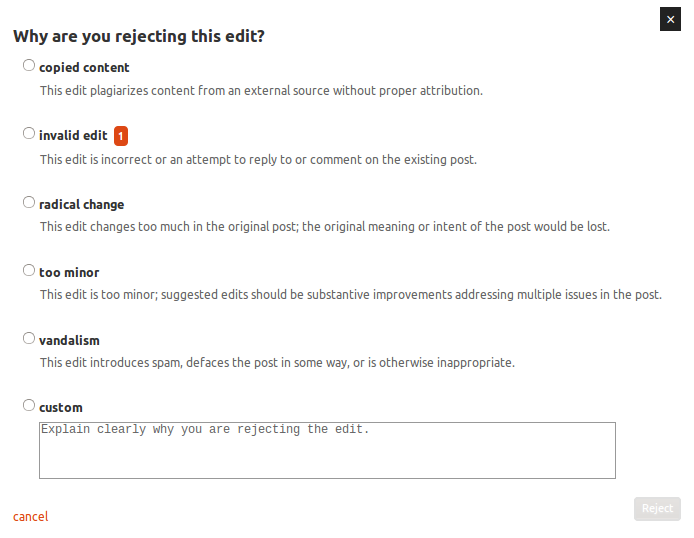 Moreover, as others have noted, you may hit the back button in your browser to go to that edit and see its fate after you have reviewed it.

You may also navigate to the History tab which lists all the edits that you have reviewed to see the opinion of other reviewers about the edit.

I don't think this is a good idea since it might influence how we vote. I think it helps the system to have everyone cast separate uninfluenced votes. In the end, if I'm not sure, then I just Skip it.

Note that after you vote, you can hit the back button, and see how others voted.

42
Proposed methods for countering plagiarized text in tag wikis
-16
Why does my post get deleted or rejected by Stack Overflow?

410
Decision on rejected edits should be displayed as a notification to the editor
86
Allow us to filter Suggested Edits and Review section by tag
343
Reject an already-approved suggested edit when rolling it back
524
The current review system encourages fake reviews; some people upvote everything rather than actually fixing problems
79
Show the post's comments on the “Suggested Edits” review interface
382
The robo-approvers are killing my will to review edits
93
Why no honeypot suggested edits?
85
Give new edit reviewers some audits to begin with
300
Moderators should be able to manually ban users from suggesting edits