Shouldn't wiki review rejects of plagarism have a source?

I submitted a backticks wiki entry and one reviewer said the material was plagiarized. I don't mind saying my contributions are minor, etc. However, this is a particularly nasty form of rejection. I have written this text from scratch. It is possible that my memory sub-consciously found something I read in the past. Perhaps this was an incident of clicking on the wrong reason radio button or maybe the intent was references are needed? I actually search around the web for references, but I didn't find anything. Wouldn't some additional text showing the source of plagiary be very helpful?

The only source I may have quoted was shiplu.mokadd.im/Jonathan Leffler were they noted a difference between backtick and $() to allow nesting. However, I thought the text was significantly different and it originated on stack overflow?

Plagiarism is not a crime per se but in academia and industry it is a serious moral offence, and cases of plagiarism can constitute copyright infringement. wikipedia

Certainly when ever I am writing a tag wiki I look at all the question tagged on stack overflow. Is this considered an infringement? I thought we were sort of a collective and the tag wiki shouldn't have to attribute the question the tag is describing. Some sort of additional text on what the plagiary was would be most helpful. 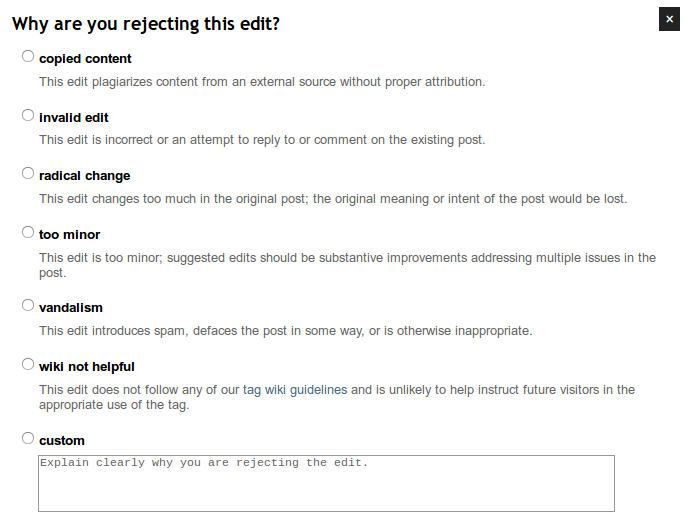 The copied content is the first reason in the list; which causes the plagiary reason text. This is unknown to some lower reputation users of stack overflow.

Why are the rejection reasons there in the first place?

Simply put, they're meant to help the user identify what they did wrong and potentially improve upon it. There's no other reason. The specific rejection reasons don't raise any automatic flags or leave negative marks on your profile. They're for you, as the person who suggested the edit, to improve your editing skills.

So, an edit rejected for plagiarism really doesn't matter

Don't know why people get so offended by this. It really doesn't matter. Rejected suggested edits appear literally nowhere but in your profile, and unless you're bringing it up somewhere, no one is going to be going through all of your suggested edits looking for your rejected edits and figuring out why they were rejected. The reason is there because we don't want exact copies of text from other sites in our wikis, not to accuse you of breaking laws or copyright infringement.

Why would they reject for plagiarism when it's not?

Who knows. Unfortunately that'll just be one rejection reason that didn't really help you out. They could have mis-clicked, meaning to hit an option above or below that, or they could just be a robo-reviewer that didn't take the time to look through the suggestion as thoroughly as they needed. But then again, that could happen for any reason. Sometimes you just don't get helpful advice, but that doesn't mean we should go in adding extra options for each reason to make sure the reviewer is choosing the correct one - that would just make rejecting too much of a pain.

But really, what would a link do for you?

So a user has to enter a link? What good would that do? For someone who is legitimately plagiarizing something, they already know where they plagiarized the text from, so giving them a link to it won't do anyone any good, more just waste time. Sure, you'll get the occasional person who just doesn't care, and when they encounter that box you propose, one of two things will happen:

So, in the end, the extra step to "prove vandalism" does nothing to help achieve the purpose of the rejection reasons - to help you.

Not the answer you're looking for? Browse other questions tagged feature-request review suggested-edits tag-wiki .

-9
Should accusations of plagiarism be allowed as baseless and easy way to put veto?