SO cache going nuts? Or do I need a lot of sleep?

For nearly 5-6 hours now, I am not getting the usual sorted list of questions on SO's interesting questions page. Here are two screenshot(with awesome red-circles)(which are becoming more common in my questions :(): 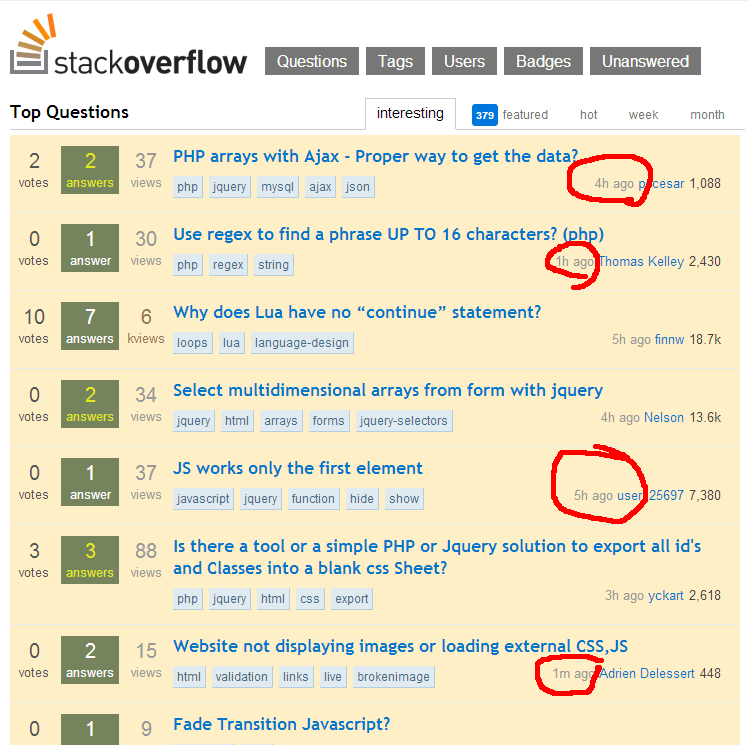 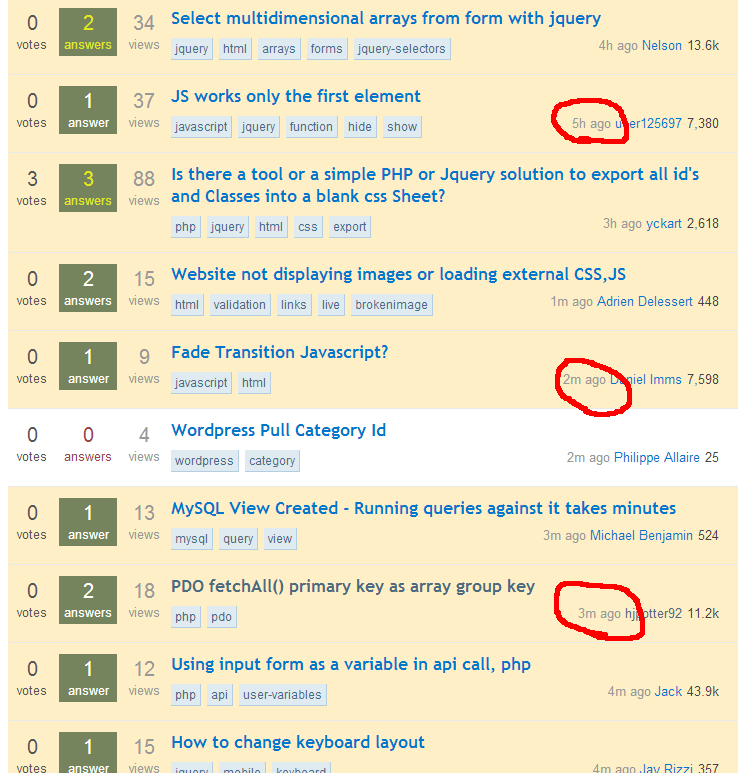 As it can be noticed, all the timestamps are placed randomly. Is it newest feature/change in SO? If so, please revert it. :/ Or is it one of the two options mentioned in the question title?

This is intentional at the moment, we're testing some improvements to interesting.

Users should not be seeing these delays anymore. Like Nick said, we were running an experiment. The thing we're testing obviously needs a performance improvement (this is a known issue). What went wrong here is that the experiment was only supposed to be run on a small percentage of the users, and it looks like every user was affected in the latest iteration of the experiment. I've fixed it so this shouldn't happen like this again, and I'll be working on some performance tuning before hammering anyone with it again. The reason we use the homepage for these experiments is that it's the only place we can collect meaningful data. If we added an 'experimental' tab, not enough people would use it, and those that did would be more self-selecting. Same with the other tabs: we could tweak "hot", but our changes would make even less sense there, and we'd still have the same data collection problems. That leaves the homepage, and we try very hard to do these experiments in such a way that exceedingly few people would notice anything different (indeed, nobody yet has pointed out the more obvious signs of the experiment).

Normally we like to get user feedback when we try new features or make substantial changes to the site. In this case, the problem with feedback is that the data we're collecting from the homepage isn't really for the homepage. It's for mobile, and not only that, but the tweaks you've been seeing on the homepage aren't what mobile users are going to see either. If we solicit feedback, we're going to get a lot of "we hate it! it's too slow! it doesn't make sense!", and our response will be "we know! it's not going to stay this way!".

It really was just an experiment: "do we get better user activity when we present question set A over set B?" The data validate or invalidate our experiment, and then we can use that algorithm to help select content to show mobile users. One of the reasons you're seeing questions hang around longer is that we want the feed of questions we provide to mobile users to be stable, and not a constant churn like 'new' or 'hot', or even like the homepage itself. We are getting feedback and bug reports from our mobile testers, and as mobile gets more mature you'll see more and more of the normal type of Meta interaction with our users that you're used to.

Not the answer you're looking for? Browse other questions tagged support live-refresh timestamps homepage interesting-page .

20
Why are 'old' questions interweaved with 'new' ones?
5
Stackoverflow questions not displaying in chronological order in Chromium webbrowser
8
Has there been a recent change in the “interesting” order?
1
“Interesting Questions” page bug?
5
Are topics suggested on the homepage based on user history?
10
Radical change of favourite tags doesn't reflect in questions list
8
Questions tagged with favorite tags pop on top of the list
7
Why did this question suddenly appear as the second newest unanswered rspec question even though it's one year old?

3
How to Reach / Recognize “Top Questions”
323
Why do I need 50 reputation to comment? What can I do instead?
257
Let’s improve our site navigation
8
Confusion about Date/Time shown on profile's activity questions tab (sorted by newest)