The main problem is that the action that needs to be taken to determine whether a close vote is valid or not is different for the 5 closed vote reasons. Of course you can always filter to only one type but that's not really advertised (I made around 1200 reviews before I've actually found out that you can filter, and only because of meta posts that describe the problems of the close vote queue system). This means that although doing close votes is the second easiest way to earn a gold medal (if you have 3k rep), people still not doing it enough.

My proposal is to reorganize the close vote system, that allows easier voting, more votes/day, and which (hopefully) will also increase the quality of the reviews.

The main idea is to separate the current queue to 3 separate virtual queues. There would be separate queues for Duplicate, Off-Topic and one for the remainig three (for reasoning read on). Each virtual queue allows 30 reviews/day/person, the first 15 close vote in each queue is "free" (won't decrease your daily allowance of 50), and you will only get a maximum of 40 points to the real close vote queue.

Visually it would look like this (note: this is based on the old type of close votes, in the new close vote system there would only be 3 queues, but you can get the idea): 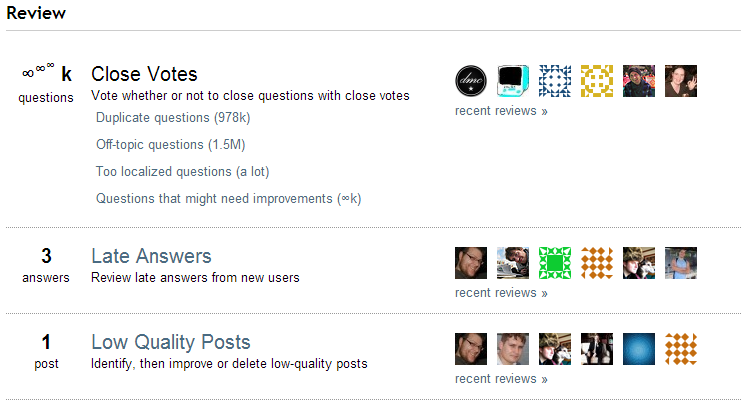 The main ideas behind the virtual queues are:

How should be virtual queues be populated? It's easy:

Now, increasing the avialable number of reviews/day won't solve the other issue, that doing the close votes properly is not really supported with the current interface, which needs to be adapted for each of the close vote types separately.

Globally we'd need a separate button of "Close as XXXX" for each queue, that will open the appropriate close vote box (for the unclear/too broad/opinion based queue it would open the list of these three options) As this might make it easy for robo-reviewers to actually mash this button instead of the "Leave open" one, we could use the same audit questions as are used inside the Reopen queue to filter those users out. Yes I'm aware of the fact that the reopen audit questions are sometimes flawed.)

(EDIT: here I talked about having different UI based on the different close vote virtual queues, but they were already done somewhat. I would still show at least the top voted / accepted answer to make it easier for example to determine whether the question was actually just a typo, but these additions already have their separate proposal pages)

Too many items in close vote queue, need more virtual queues and the interface should be different based on the queue you're in.

173
Huge close votes review queue on Stack Overflow
203
Help us make "Not Constructive" and "Not a Real Question" closures more effective
183
Close Votes review: I'm going on a strike!
100
Add "Flag as Other" checkbox to "Vote to Close as Off-Topic" dialog
57
Daily close votes queue limit
62
Is there something we can do against "Ask this on xyz.SE" comments?
29
Ideas for the close queue?
43
Increase close votes in /review
58
Please put answers underneath questions in Close review queue
25
Would raising the review limit help with the Close Votes queue?
See more linked questions

541
How about a "Vote not to close" option to counter the "Vote to close"?
850
Can we have the ability to retract a close vote before it closes?
535
The current review system encourages fake reviews; some people upvote everything rather than actually fixing problems
413
Add an "I don't understand" option for review audits
251
Increase close vote weight for gold tag badge holders
121
Visual design changes to the review queues
188
Testing three-vote close and reopen on 13 network sites
236
Review queue workflows - Final release