Reminding users about the private beta and their commitment

Here, on the Arduino private beta, we've noticed that there's a lack of active users (only 30). The issue is that 115 have logged in at least once - and that means that 85 people have thought that logging in satisfies/fulfils their commitment. Is there any way of having people gently reminded that they need to be active and ask questions/answers to fulfil their commitment?

Firstly, this is normal: A very small percentage of users end up fulfilling the commitment.

Out of those that committed, less than half (164, or 47%) signed up for the site within the first few days of private beta. After a reminder was sent out, an additional 135 users signed up. We have 299 users now, but almost half arrived late to the party. We're concerned that some might have been showing their support for the site, but weren't especially interested in helping it launch. We hope we're wrong.

One of the reasons I didn't commit on Arduino until after the commitment threshold had already been reached was that I wanted to help the site launch, but didn't want to push it into beta before it had enough support. From the number of people committing as Beginner or Learner with (no comment) attached, I was concerned that there would not be enough experts, but ironically, we seem to be more short on questions.

I knew that I wouldn't have any questions to ask and doubted that I could help answering many questions, but I did want to help the site succeed, and my intention was to do so by voting, commenting and reviewing questions and answers, even if that meant tying up one of my commitments slots for a long time.

Personally I think that Area 51 doesn't quite have the balance right. I think the commitment decay needs to be faster for instance.

If a site is close to full commitment, people should be excitedly coming back to Area 51, frequently renewing their commitment, checking on when the site is likely to be launched and being ready to jump on board when the site goes live.

Someone who doesn't visit an Area 51 proposal in the last month of it's commitment probably won't be active on the site, so the good intentions of people just wanting to show their support probably do more harm to a proposal than good when it comes to the private beta.

What can we do?

We need to reach out to users on the beta site and get people who were once enthused about the proposal to actually ask questions. One way to do that would be to open a meta question and then flag it for the community moderator team to make it a featured question, so it appears on the Community Bulletin inset on the main site.

We also need to reach out to experts and get them to come to the site though. 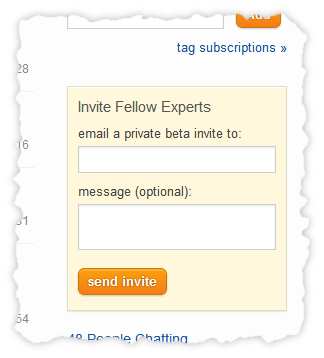 Experts not only add the ability to answer questions, but they also have the breadth and depth of knowledge to anticipate what questions a site will need to have answers for, ask those questions and provide answers themselves, to help seed the site.

Not the answer you're looking for? Browse other questions tagged support private-beta .

43
Allow commitments to expire, or provide amnesty for early-adopter commitments
18
Can we get Stack Exchange notifications when a private beta starts?

752
Which tools and technologies are used to build the Stack Exchange Network?
23
What is "private beta" status?
818
What are the badges I can earn on each site, and what are the exact criteria for earning each badge?
183
Who are the diamond moderators, and what is their role?
643
What is the association bonus, and how does it work?
8
Difference between private and public beta
13
How can the community effectively respond to a problematic user during private beta?
286
Under what circumstances will Stack Exchange, Inc. share private/sensitive information with the press?