I just noticed that new users are redirected to "How to Ask" page when trying to visit https://stackoverflow.com/questions/ask.

So far so good, it's important they will read and who knows, maybe even keep in mind.

However, there is a glitch as far as user experience is involved. The bottom of the page is:

In most sites/forms with that mechanism, the "proceed/continue" link/button is disabled until the checkbox is ticked. However that's not the case here. Users can click "proceed" just fine, and in case they did not tick the checkbox, they are simply being redirected yet again to the same page. No alert. No message. Nada.

Of course they can use their mind and finally understand "hey, I need to tick that checkbox!" but honestly, I don't think it's a good experience. Unless this is on purpose to be some sort of initial test I think the link should be disabled or at least some alert should be displayed when trying to proceed without ticking the checkbox.

This behavior can be reproduced only by accounts without any questions. (Otherwise clicking proceed without ticking the checkbox will simply take you to the actual "ask a question" page)

The message seems best to me; this is something we really want people to read. Like one of these the first time: 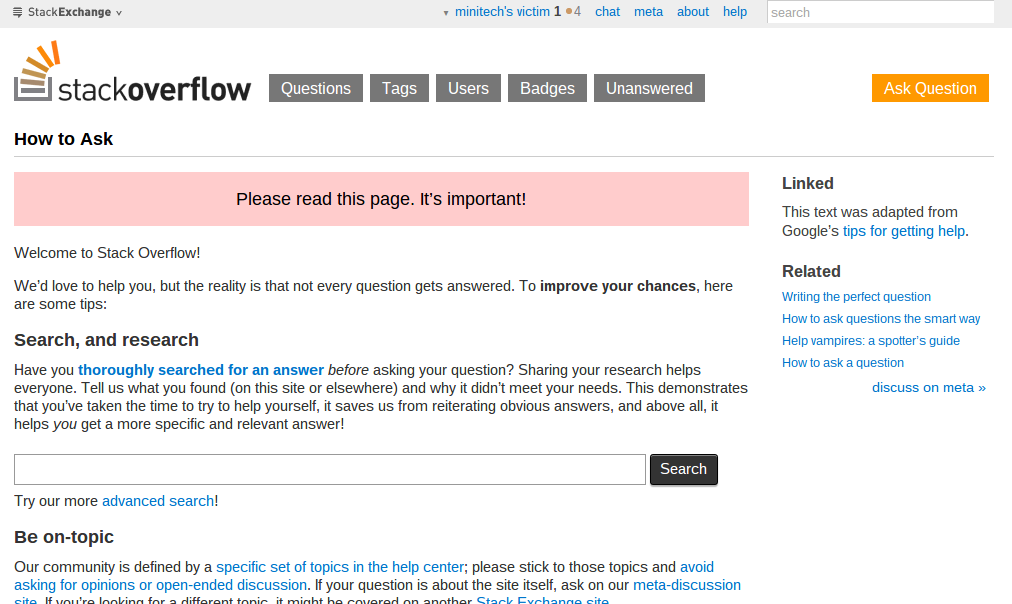 The second time, it needs <blink>. (There are some shims for incompatible browsers.)

I agree with Sha Wiz Dow Ard that it is bad user experience.
You shouldn't provide a "Proceed" button which returns the user after they click it, without telling them why, or at least stating something.
It's just.... teasing!

It doesn't let them "proceed" as the button wording lead them to believe!

I also agree with Bart's logic, to a certain degree:

Now you actually have to carefully read it. You can't mindlessly proceed to ask your question.

Sending them back to the message might get them to read it, however they still don't have to read it, they just have to figure out to tick the box.

Some people simply don't care about reading it at all, or think they've read it all before, so quickly find and click the "Proceed" button (aka I don't give a ship just let me at the question).
After it brings them back to the same place, most people will scan up, see the tick box and click it and click proceed again.

Or they raise a question on Meta, or naff off and never return.

Nothing gained either way.

While this method is to try to make people read it (leaving the "Proceed" button there and not telling them about the closely guarded secret of the tick box) user experience shouldn't be lost.

Suggestion
After they click "Proceed" without ticking the box, then have a red banner at the top stating:

You MUST read this first

With the proposed banner being at the top, after they click-with-no-tick® they will (hopefully) bring their eyes up past the tick box and hopefully read down over.

Possibly thinking there is some kind of magical all seeing eye knowing they didn't read it, or, just there's a timer...

Magical believers or not, it might get some people to read it as it distracted them from what would have been a quick scan around and finding the tick box.

Yeah some people will still just find the tick box without reading.
There is no magical way to get people to read and follow rules. In fact it's more likely those who would take note, remember it, and actually use the guidance would read it anyway, it's not much to skim through.

Not the answer you're looking for? Browse other questions tagged feature-request asking-questions new-users user-experience .

551
Exit strategies for “chameleon questions”
190
Let users with sufficient reputation use “problem” in titles
95
Why is asking a question on “best practice” a bad thing?
19
Add message box that suggests resources to new users before they ask their question
12
How to Ask page doesn't correctly encode the question typed in the search field
5
Help tooltips for new users asking their very first question
86
A way for “new users” to ask about their post specifically
164
Usability issues for first-time Stack Exchange users - a micro-study