Why isn't the period rendered after a question link?

In an answer, I was writing the following sentence and I noticed the period was not rendered. 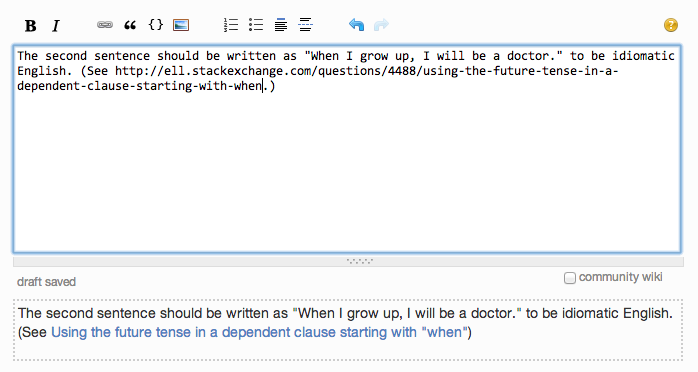 Why isn't the period rendered? If I write a generic URL, it is rendered.

When URLs are auto-linked, we never include a trailing period (or comma or question mark etc.) for reasons that are very obvious in your question. However the change to improve auto-linking around trailing parentheses is made in such a way that the closing paren is first included in the to-be-linked URL, only to be excluded again if we find that it has no matching opening paren inside the link.

This exclusion of the trailing paren obviously changes the character that ends the URL, so in this case we have to check again that the new trailing character (in your case, the period) is still a legal character to end the auto-linked URL, If it's not (as in this case), it has to be excluded as well.

This is fixed in both versions in the next build. I realized while typing this answer that this still isn't quite right, since it fails to handle situations where more than one such trailing character ends the url:

– I'll fix that as well. That's a much more rare edge case though.

As suggested already by @balpha in comment, the question titles replace their link from posts, a dot is included in it too. The . character is valid in URLs and hence, passed as it is for fetching the page title.

As for your drupal link example, you can notice that (See http://drupal.org.) while rendering correctly, attaches an ending period character to the link too!

Not the answer you're looking for? Browse other questions tagged bug status-completed hyperlinks posts .

14
URL detecting error with address like “http://en.wikipedia.org/wiki/Octet_(computing)”
6
Is dropping the final period in a bare url done by-design?

1184
Encouraging people to explain downvotes
14
Why isn't stackoverflow using www in the URL?
56
Make it clearer that an answer was converted into a comment, not just deleted
42
Adding a new link to a post messes up indexes in square brackets in code already present in the post
193
Allow moderators to reply to a flag
74
Is “stackoverflow em Português” for Brazilians only?
84
Reset question grace period once an answer has been posted
577
We're switching to CommonMark