Ask Question
Asked 12 years, 10 months ago
Modified 2 years, 1 month ago
Viewed 2k times
118
This question already has answers here:
Subscribing to questions and comments that don't belong to you (5 answers)
The Follow Questions and Answers feature is now live across the Network (45 answers)
Closed 5 years ago.

Right now there isn't a great way to monitor the questions that I am interested in following. What I seem to do now is go to my recent history for questions I have commented on, and then link to the questions from there. The problem is, if I am really interested in a question, I have to monitor it closely. Sometimes I will "favorite" a question so it is easier to access more quickly, because I do not have a lot of favorites. But favoriting is not the right thing to do. I think you should only favorite a question if you really really like it, not to make it easier to follow.

I propose that you can mark questions as "interested" or something like that. What this means, is that you will get notifications for everything associated with a question: any time a new answer is posted, the answer/question is edited, and any comments to any of the answers (or question). This would make it much easier to follow questions. Especially if someone adds a new answer or comment way down the road, after you have long forgotten about the question.

It would also be nice if such a feature allowed you to write a sentence or two to associate with the question to remind you about something. In fact, if this is done, we could just use this feature to implement Jon Skeet's idea to allow an edit to notify downvoters. Instead of that specific feature, you can mark a question as interested after downvoting and add a comment, "remove downvote when fixed".

What do you all think? Do you propose a better way to manage monitoring questions of interest? (The other thing I do is keep a bunch of browser tabs open with questions I am following... and this is messy :-( ).

Rather than continue to comment on other's posts. I've decided to open myself up to downvotes by answering.

There have been at least two recent metaso questions related to this issue.

Which is about being able to be notified on edits on only a single post. Not the entire question (RSS feed and/or Favorite)

What level of notification should we have regarding questions we have posted an answer to (or left a comment) ?

Which is about being able to be notified on comments on only a single post that has been commented on.

Basically, these all fall under the same broad category of being able to get MORE information about specific things that are changing rather than broad strokes.

RSS - doesn't cover this problem, because the RSS is on the entire question, which, if the question is very active, would be an incredible amount of noise if you are only concerned with one answer. Also, as noted in my comments, I prefer my Outlook inbox to be for work emails, but that doesn't mean I don't want to be notified about these things when I log in to SO.

Favorite - I can favorite a question, but then I have to manually check every one of them to see if any comments have been added, or any of the pieces of it have been edited. And again, I would still need to click through in order to check if the particular post I was concerned with was edited.

My suggestion for these were enumerated on both the previously linked questions, but I feel it's worth repeating.

Have a checkbox on every individual post that says "notify me when this is edited" which would generate a notice in your "SO Event Feed" (the thing that shows up when you click the mailbox).

Have a checkbox on every individual posts that says "notify me when this is commented" which would generate a notice in your "SO Event Feed".

A third option would be to merge those two, since it seems likely that people who want to follow the comments would also follow the edits.

That way, you could choose precisely what you want to be informed of.

This is implemented -- if you favorite a question, you opt in to updates on that question and they will show in your /recent/ and light up the envelope, just as if you own the question.

Update: the feature has been pulled and is not currently available; see the most recently updated post on that

Update: this has been re-released as the Follow Questions and Answers feature in 2020.

Sometimes I will "favorite" a question so it is easier to access more quickly, because I do not have a lot of favorites. But favoriting is not the right thing to do. I think you should only favorite a question if you really really like it, not to make it easier to follow.

Maybe I'm not clear on just what exactly favorite questions are supposed to be used for. I thought the only reason to favorite a question was because you wanted to be able to find it later. It doesn't count as a second form of voting, in my mind.

However, I would support your suggestion that we could mark questions to receive notifications, especially for the purpose of tracking comment threads on questions/answers I don't own. I have made a few feature requests that are a little similar:

Could You please include some example input and desired output examples?

This happened several times. How do I return to this question to see if I can help? I could mark the question and search through them manually later... But the 'favourite' feature has been named like this for a reason. It's designed to help You mark the questions You like for some reason, the ones that are valuable for You - and this is how I use it.

To see later if the question was edited, I send myself an email with a link to the question. I then review it after a day or so, but this is NOT how programmers do things.

Looks like I am posting on an old thread but I am pretty sure all people in this post will like it. I have build StackEye - A Chrome Extension for exactly same purpose.

Install StackEye from chrome store and go to a question page and click on the eye button to follow it and there you go. Just sit back and keep doing your work, once there is any update on the question StackEye is watching it for you and notify you in the extension popup. Quick look at these screen shots 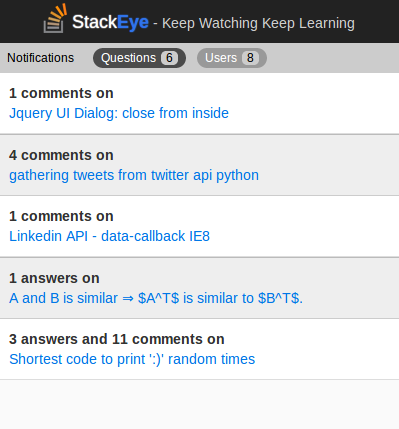 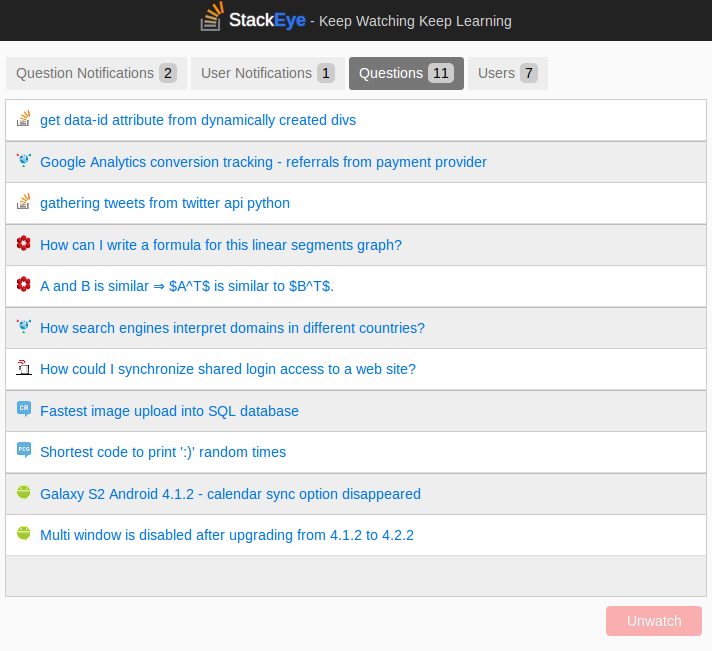 StackEye does even more viz Follow user as well. Check out more screenshots available at Stackapps page. And do not forget to give it a try if you like it.

Edit Forgot to mention that StackEye also notifies about new comments and new answers. Rest other type of activities (edits/upvotes etc) are not taken care of intentionally. Just not to irritate users by a lot of unnecessary notifications. Hope it make sense to others as well :)

Why not provide two different methods of monitoring questions?

I've just signed up at ServerFault.com and find that having no suitable monitoring mechanism for questions a little lacking. I participate at a number of Q&A or forum sites, all of which have some method of tracking updates to a thread, such as a feed on logging in to the site or email notifications.

Your best option here is going to be adding changes to monitored questions automatically to the Recent Events feed. Then provide an option in member profiles to control whether a user wishes to receive the email notifications.

This satisfies two requirements - people receive notifications by email if they wish for them. Those who don't, or those who participate at SO or SF regularly will see a feed of recent updates on logging in.

Use the RSS feed for the question? I know that this is not the most ideal (can't see comment posting, etc.) but until a better solution is implemented, this is what you are stuck with.

Note: I am not saying that a SO-based solution would not be nice, I am just giving an alternative option compared to a brand new feature that needs to be designed and implemented.

To expand upon TheTXI's answer, I use RSS feeds combined with Google Reader. I feel it is a real winning combination.

It seems to me that between RSS feeds, interesting tag filters, favorites, and the recent history envelope, you should be all set. What are we missing?

Not the answer you're looking for? Browse other questions tagged feature-request questions notifications .

216
The Follow Questions and Answers feature is now live across the Network
184
Subscribing to questions and comments that don't belong to you
49
Please allow me to follow questions
3
Feature Request: Notifications for question answers
2
Tracking a post
1
Receive notifications for someone's questions in iOS app
0
Getting notifications on specific question
250
Let's Plan the Second Iteration of the Stack Exchange Quality Project!
863
Allow an edit to notify downvoters: "I think I've fixed the issue now - please check"
148
Adding Favorites to the Stack Exchange global inbox
See more linked questions

1220
Encouraging people to explain downvotes
863
Allow an edit to notify downvoters: "I think I've fixed the issue now - please check"
992
Show all of my question/answers to me even if they are deleted
716
How do I get attention for one of my own questions without a good answer?
921
Why aren't people voting for questions?
1490
Fastest Gun in the West Problem
600
Exit strategies for "chameleon questions"
480
Is cross-posting a question on multiple Stack Exchange sites permitted if the question is on-topic for each site?
446
Reward finding duplicate questions - +10, +2, -5
1245
Don't throw away all votes when a user is deleted