A moderator election just finished up on math.SE. Eager to find out who won, right after the election closed I followed the given directions: 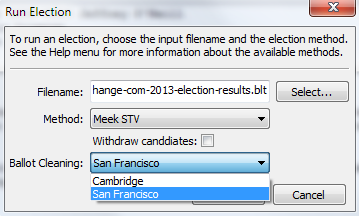 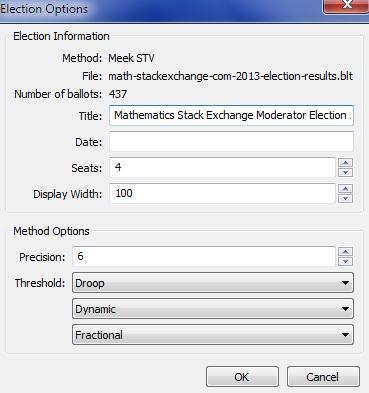 What is "ballot cleaning"? "Precision"? "Threshold"? I have no idea what any of these things do, and what appears to be the only relevant meta.SO page doesn't say which of the 336 combinations of options I should set.

Yes, the program has defaults - but are those defaults how the SE team computes the official results?

Yes, I bet these settings would rarely affect the outcome - but if an election ever occurs where they do matter, it puts the SE team in the awkward position of having to decide which options to use when they are able to see how their decision is going to affect the outcome.

Adding a completely unambiguous description of how election votes are being counted should be a simple fix that might prevent a big headache in the future.

We use the MeekSTV method and the default options.

Not the answer you're looking for? Browse other questions tagged feature-request election documentation .

256
How are moderator election votes counted, in plain English?
25
How does Stack Exchange handle election ties?

7
Allow users to pose questions to moderator nominees in the election software
15
Who can split the votes in the primary election
256
How are moderator election votes counted, in plain English?
3
The election pages offer an outdated version of OpenSTV
5
Another election description discrepancy — how many nominees go to Primary?
69
What are the details on the “candidate score” which shows during an election?
22
Allow us to rank all the candidates in a moderator election
7
OpenSTV (election results viewer) doesn't come with source code nor with an offer to provide it, violating the GPL
11
Election notification description is not displaying in the global inbox
10
Server error when downloading OpenSTV software using link on election pages