Why do people make really trivial syntax edits in questions?

This question especially applies to questions which query syntax errors

I've noticed an increasing number of edits by people changing syntax in questions to remove extraneous syntax. Edits are frequently single character and include other (even less obvious) edits to get over the minimum character limit.

For example. The most recent edit I saw, someone carefully deleted a useless semi-colon and space from a shell script changing:

As another example I've seen people re-indenting SQL code from one well known and used standard to another standard (one I've only seen in college, not industry).

Also removing tags because the answer is general to all of shell, not just Bash ... so the bash tag removed from the question... is that not something which should get edited into the answer, not out of the question?

Are these people just making the edits for the sake of the +2 rep, are some people so terribly irritated by unusual syntax or is there some more useful reason to these edits that I have not seen?

Some people try to modify the code to show the OP the mistake they make in their syntax. This is wrong. Instead they should post an answer or a comment (preferably an answer if they want credit).

Reject the edit as Radical Change and hopefully everyone else will too. 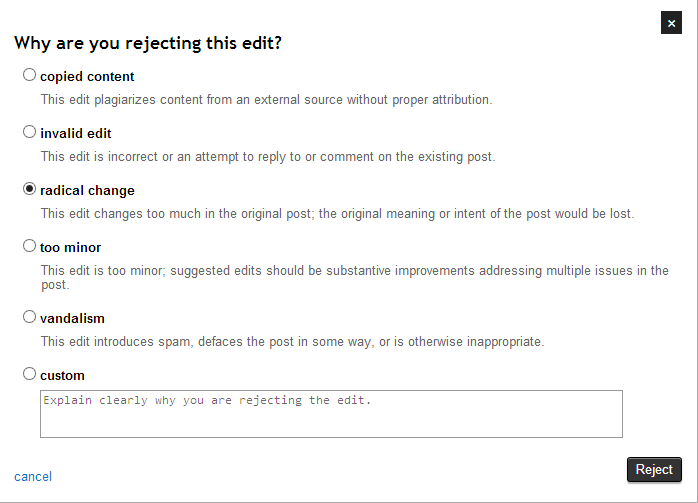 Usually when I make drastic indentation edits, I run the code through a tidier like JSFiddle's built in one. This will bring the code to the applied code convention. Other people use their flavor of code convention, which isn't always right. If you feel it's against the common code convention, reject or improve it.

People want to get "dem' badges". Sometimes this can be a bad thing, and even sometimes they screw up the code in the process. If it messes the post up too much, reject the edit or improve it yourself.

In the same vein as the mention of Badges!...

Rather than dive into the Questions list, the easiest way to bring a poor post requiring editing to one's own attention is to review First Posts / Late Answers (killing two birds with one stone by taking out one of one's review quota for the day) . While you're reviewing an item, the majority of the time, an edit must be made. Unfortunately, edits take time and these queues empty quickly.

It's been my own desire (and I've not succumbed, but I'm sure others have) to throw in a quick edit, hit "I'm done" to qualify the review in the count, and then jump to the next item to review, scoring both an edit point and a review point. I take too long to edit and usually I get the "there are no reviews left" message, but I'm fairly certain there are reviewers who simply blow through edits on the items they're reviewing to quickly get to the next review before the rest of the items in the review queue are consumed by other reviewers.

Not the answer you're looking for? Browse other questions tagged discussion edits code-formatting syntax .

873
Why aren't people voting for questions?
1387
Fastest Gun in the West Problem
342
Reject an already-approved suggested edit when rolling it back
521
The current review system encourages fake reviews; some people upvote everything rather than actually fixing problems
293
How do we encourage edits to obsolete/out of date answers?
523
The MIT License – Clarity on Using Code on Stack Overflow and Stack Exchange
2753
A Terms of Service update restricting companies that scrape your profile information without your permission
820
Net Neutrality and Stack Overflow / Stack Exchange
1862
Stack Overflow is doing me ongoing harm; it's time to fix it!