I proposed two (very similar) edits to this answer and both were rejected in a close 3:2 vote. This is all fair enough (I don't want to dispute the vote), but I find it curious that in both cases, all rejecting reviewers selected the same reason.

The question that came to my mind is: Did the reviewers independently come to the same conclusion, or can they see each others reviews?

Just in case someone wants to look at the concrete proposals which lead to this question, here is what happened:

First, I wanted to just change the backticks to $(...), but the system rejected the change as too minor. So I looked for other things to change, tried various things and eventually decided that it would be better to not have the explanatory comments as part of the code block. Since the edit was messed up at this point in time, I started over and proposed this change - forgetting about the originally intended backtick change. It got rejected with three "original meaning or intent of the post would be lost" votes. I assumed that this was because of the "parameter must be" wording, which was kind of incorrect: the parameter can also be an absolute or non-normalized path, and the script still works. So I tried a second change avoiding this mistake (and including the backtick change), on which three reviewers agreed that it is "incorrect or an attempt to reply to or comment".

Yes we see, but only the amount of rejection of each type: (can't see how many approved) 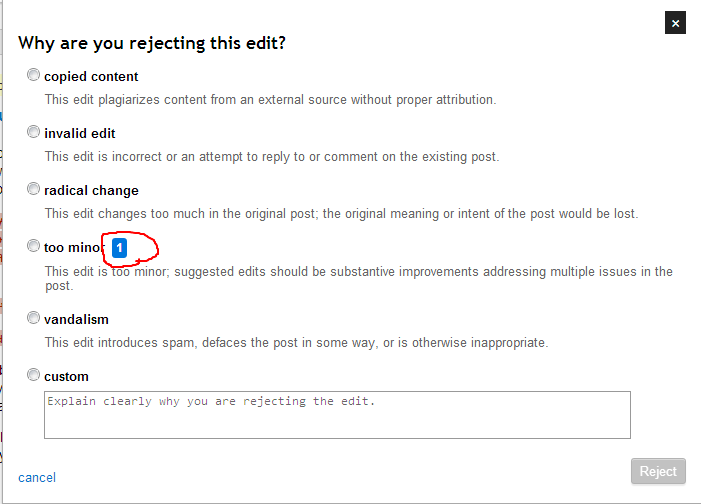 This seems to be just two different sets of reviewers. Yes, you can see the number of votes for a given reject option, and that's probably what influenced the second rejection. Someone saw what looked like a paragraph and thought you were editing in commentary. They selected that option, the next reviewer glanced at it, saw the one vote for it, which turned into two, which turned into three .. basically the wisdom of the crowd at work.

Radical change would have been the right call to reject the edit, but I can see why it would take some a second glance to realize that. The addition that you made would probably have been better as a comment.

Not the answer you're looking for? Browse other questions tagged discussion review suggested-edits .

383
The robo-approvers are killing my will to review edits

1412
Fastest Gun in the West Problem
283
How do suggested edits work?
345
Reject an already-approved suggested edit when rolling it back
105
Could authors overturn recent community review decisions?
301
Moderators should be able to manually ban users from suggesting edits
825
Net Neutrality and Stack Overflow / Stack Exchange
2365
Firing mods and forced relicensing: is Stack Exchange still interested in cooperating with the community?
401
Why taking responsibility for other people's feelings doesn't work
2005
Stack Overflow is doing me ongoing harm; it's time to fix it!