German place names in Careers entries are extended with their formal administrative prefixes:

This kind of notation may be the formally correct name for the place (when it's not flat-out wrong as it is for Darmstadt), but like elsewhere in the world, normal people never use it. This is like saying "City and County of San Francisco" instead of just "San Francisco".

This looks weird to the point of confusing users as to where the job actually is located; where a city is also a county ("Stadtkreis"), it also suggests that the job is only in the city's vicinity. 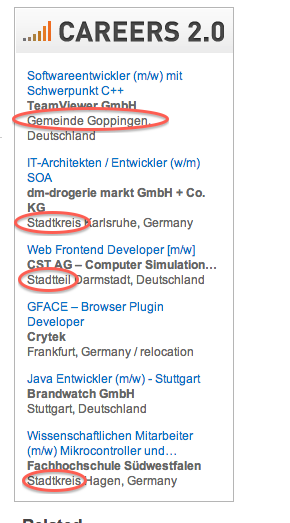 Looks like the external service we're using to geo-code locations had a little bit of a hiccup and decided to add those prefixes for a short period of time.

Only a small number of job listings were affected which we've fixed manually. Enjoy Careers ads free of all Stadtkreise, Ortsbezirke and Gemeindeverwaltungsverbände!

Not the answer you're looking for? Browse other questions tagged bug status-completed jobs .

4
Careers has the correct city name, but wrong country
17
Language confusion with Finnish province and city names in Careers
36
Didn't we stop kicking the baby in the ads for Careers?
25
Feedback Wanted: Careers in German
6
City names are not translated in Stack Overflow Careers
5
Missing translation in German StackOverflow careers