Why does the Community user approve and reject edits?

Why does the Community user sometimes approve or reject edits?
How does a machine know if my edit is valid?
What does it mean if my edit was rejected by Community?

When a user suggests an edit, their edit is put in the Suggested Edits review queue. The edit will leave the queue under three conditions:

The first two should be self-explanatory, but the last one can be a bit confusing. Community is an automated script designed to take care of maintenance for the site, and it may approve or reject edits under the following conditions.

A reviewer either improves an edit, or rejects and replaces it with a different edit

When one is reviewing suggested edits, there are five available buttons, two of which allow the reviewer to edit the post themselves:

This type of rejection will count towards a potential editing ban. (In the past, no edit rejected by Community would count towards it, since it wasn't possible to distinguish between this case and the below case, but now it is.)

A user with full edit privileges saves an edit over yours

If a user with full editing privileges for a post (including the original poster) begins editing the post before you submit your edit suggestion, and they save their edit after you have already suggested it, then your suggested edit will be overridden in favor of their fully-privileged edit.

This is known in software as an optimistic lock. This is an edge case, and does not happen often because users with full privileges who try to edit a post after you submit your edit will be directed to your suggested edit instead. Thus, when one person starts editing a post, we do not need to lock everyone else out. While the UI attempts to avoid these situations (through live refresh messages such as "This post has been edited"), they do sometimes occur.

This sometimes appears strange to a viewer — as if Community has immediately rejected their edit, without warning, with no hesitation. 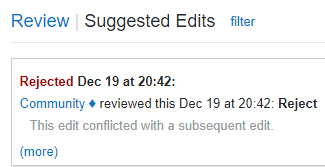 Do not be alarmed! This is just concurrent modification working its evil magic once again. This type of rejection will not be counted towards automated edit bans. Simply submit your edit again and it may actually be reviewed.

Another way this can occur is if a fully-privileged user makes an edit, then you suggest another edit right afterwards, and then the first user makes another edit during their 5-minute grace period. In that case, a new revision is not created, but your suggestion is still automatically rejected due to the edit conflict.

Honorable mention: a user who reviews an edit gets their account deleted

This may lead to situations where the Community user appeared to approve an edit without a corresponding "Edit" review, or appeared to reject an edit without a corresponding "Reject and Edit" review or a message explaining that it was an automatic rejection due to edit conflict. The review in question was performed by a now-deleted user; Community is just taking retroactive credit for their action.

502
How does deleting work? What can cause a post to be deleted, and what does that actually mean? What are the criteria for deletion?
1095
How does accepting an answer work?
1019
What are "Community Wiki" posts?
588
How does the bounty system work?
666
How do comment @replies work?
298
How do suggested edits work?
573
What is serial voting and how does it affect me?
645
What is the association bonus, and how does it work?
568
What is syntax highlighting and how does it work?