Edit in content, from third party, to link only answer?

I just ran into this in the suggested edits review: 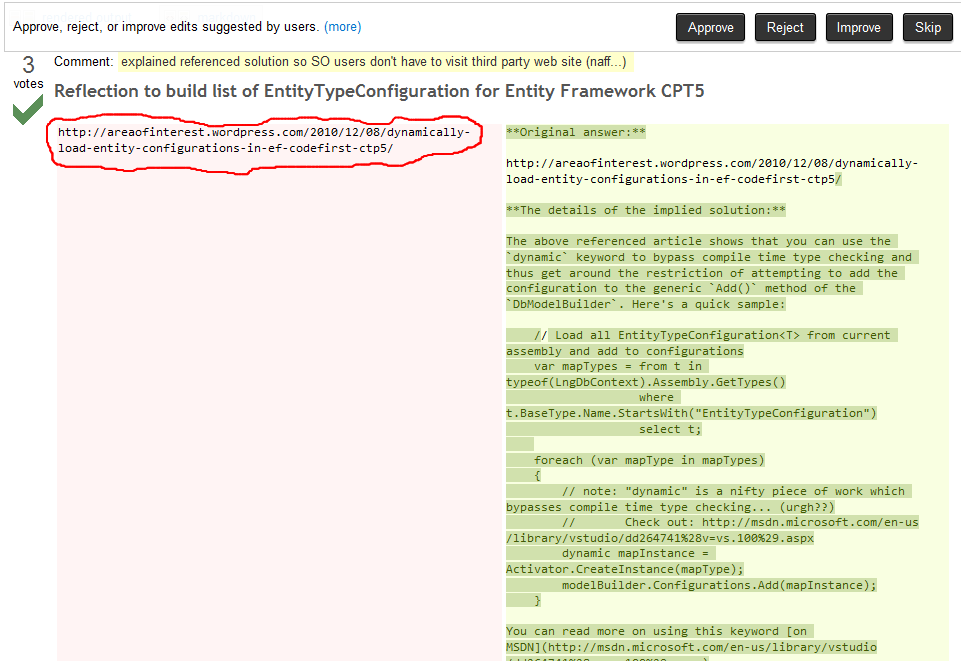 Its literally a link only answer, but apparently it was helpful and was up-voted and accepted.

Now (a few years after the answer was posted) someone has edited the content from the third party site into the post.

I have a few questions here:

discussion suggested-edits link-only-answers
Share
Improve this question
edited May 23 '17 at 12:35

Editing an answer to improve it, so that it is more suitable for the site, is always the best option.

The only other option is answer deletion, or converting the answer to a comment.

Linked content should never be copied in its entirety on Stack Exchange. Always respect the original author by paraphrasing and quoting brief snippets.

If the linked content is copied verbatim, reject the edit as “copied content”. If you can, write up the solution in your own words as a separate answer, then flag the answer for removal (either as “not an answer” or with a custom flag saying that the link is redundant due to your answer — Stack Overflow moderators can't seem to agree on this).

If the solution comes from the linked site but the writing is original, the best thing to do in such a case is to post a new answer with these explanations. Strictly speaking, you should reject the edit and suggest that the user submit it as a separate answer. However this assumes that the user will see your reject message, which is unlikely since there is no notification of rejected suggestions and they are hard to find even if you know where to look.

If the edit is anonymous, I'd post it as a separate answer, community wiki, credited to an anonymous editor. If it's by a logged-in user, I don't like to do that, because it removes any association between the user and his content. So I would tend to accept the edit, and leave a comment to the editor under the answer (“@bob Thanks for the edit, but since this is your original writing, it would be better to submit this as a separate answer, even if you found the link through this answer.”).

I always prefer not to have link only answers because you never know when the third party site hosting to solution becomes unavailable. It is always good to have a sufficient snippet of the answer rather than just a link.

Not the answer you're looking for? Browse other questions tagged discussion suggested-edits link-only-answers .

123
Can we get some consensus on what flag to use for link only answers?
67
Should I flag answers which contain only a link as “not an answer”?

291
How do suggested edits work?
415
Decision on rejected edits should be displayed as a notification to the editor
530
The current review system encourages fake reviews; some people upvote everything rather than actually fixing problems
683
Your answer is in another castle: when is an answer not an answer?
521
Global auth is dead! Long live universal login
295
How do we encourage edits to obsolete/out of date answers?
2777
A Terms of Service update restricting companies that scrape your profile information without your permission
330
Gold tag-badge holders and moderators can now edit duplicate links
2426
Firing mods and forced relicensing: is Stack Exchange still interested in cooperating with the community?
578
We're switching to CommonMark