Sometimes "user was removed" is less secret than others?

Yesterday, I had an accepted answer removed on this question (10K), due to the question being removed.

It seems clear that the user was removed.

How did I track this down? Well, my reputation tab shows the following:

Usually, this is much more generic, without any clues to which post was removed (and I thought this was by design):

After an exchange in chat, I was curious if the rules about disclosure had changed. I discovered two interesting things:

So, my question, naturally, is why was the deleted post (and removed user) exposed to me, but not to bluefeet?

Other than curiosity, I don't think there really is any benefit to exposing to me which user was removed and which post(s) affected my reputation, but I am curious nonetheless about why this happens in some cases but not others, and why some removals on the rep tab are visible to other users, but apparently not when the post is identified.

support deleted-questions deleted-answers
Share
Improve this question
edited May 23, 2017 at 12:36

The difference is between user removal and post removal.

When a user is removed, the votes that the removed user cast are nullified (except, iirc, if it was a very active user, the votes remain, since removing them would have too much impact, and allow inferring his/her voting pattern).

Such reputation events are public (as witnessed in bluefeet's profile), but neither the profile owner, nor anybody else [except maybe diamonds] can see which posts were affected.

A post removal on the other hand (as is shown in the screenshot from your profile), and the associated reputation change is not public. Only the affected user (and diamonds, as far as I know) can see it in the profile. That's why you (and I) can't see the question removal that sparked this question in Gordon Linoff's profile. I can't see it in yours either: 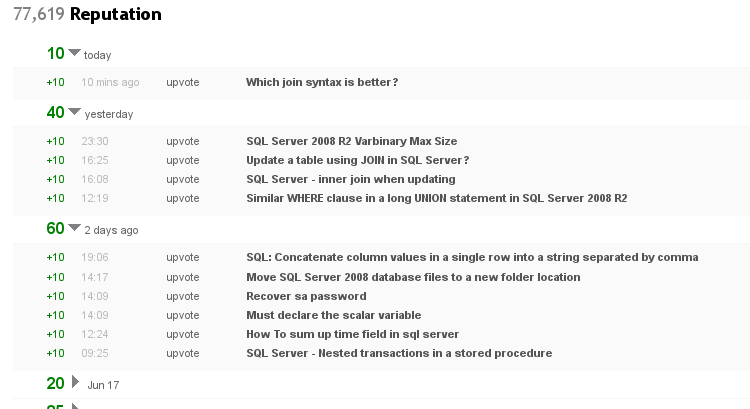 I can see three user was removed events in Gordon's profile on Jun 15th, and one in yours on May 5th. But of course no post-removal events.

The question in question was indeed removed because the OP's account was deleted. In such an event, the removed user's posts with a negative score are automatically removed some time later (not sure how frequently that job is run).

But the removal of the user and the removal of his/her posts are separate events, usually days or even weeks apart, and are listed separately on the reputation tab.

This version fits the events (knowing for sure would require an SE dev with access to the code), but it highlights the ambiguity of the wording of the message. Though to be honest, it doesn’t really matter in the end; a user was removed which had a cascade effect that ultimately cost or gained you some reputation. What does it matter which user or even which post was affected? The reputation change had nothing to do with you or other users that voted for your post, it was due only to the user that was removed, and so there is no action for you to take.

Not the answer you're looking for? Browse other questions tagged support deleted-questions deleted-answers .

992
Show all of my question/answers to me even if they are deleted
716
How do I get attention for one of my own questions without a good answer?
1032
What are "Community Wiki" posts?
592
How does the bounty system work?
836
What does "user was removed" mean and why did my reputation change because of it?
572
What is serial voting and how does it affect me?
357
What are review tests (audits) and how do they work?
342
Why do I need 50 reputation to comment? What can I do instead?
981
Firing Community Managers: Stack Exchange is not interested in cooperating with the community, is it?