Can we have the ability to flag for reopening?

TL;DR: Grant 500+ rep users (except the OP) the privilege to flag a question for reopening.

Currently, you can flag a question for closing, and it automatically enters the "Close Votes" review queue, where 3K+ users can vote to close (or to leave open) the question. 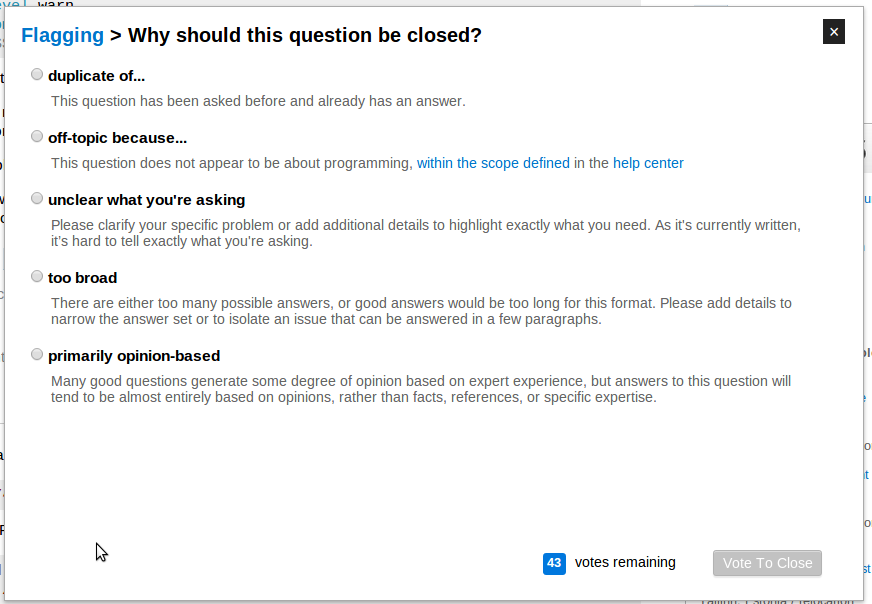 However, there is no ability to flag a closed question for reopening. A <3K user must either:

Add the ability to flag a post for reopening, just as you can flag for closing. The UI of the flagging dialog for closed post could look like this: 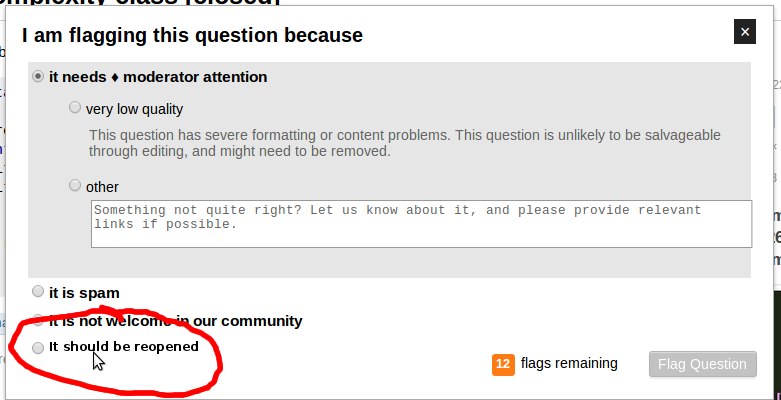 A reopen flag would instantly bring the question into the "Reopen Votes" review queue, where 3K+ users would vote to reopen (or to leave closed), just like when a reopen vote is cast on a question.

This option would be available to everybody except the OP of the question, since he can bring his question to the review queue by editing it. A reputation limit could also be added to prevent abuse, e.g., 500 points.

This idea has an immediate appeal to those of us who appreciate symmetry. However, I strongly suspect this would be an extremely impractical flag to add...

See, closing and re-opening aren't exactly equal. Most notably, closing requires you to specify a reason - reopening does not. This cuts both ways: closing requires more effort, but other voters also have a reason they can either agree or disagree with; unless the person voting to re-open left a comment, there's nothing to indicate why he thought re-opening was a good idea. Hopefully it's obvious... But if not, a good many voters won't do anything to change the status quo.

It's already possible to flag for re-opening, of course. And over the years, over 900 flags have been raised on Stack Overflow for this purpose with 37% resulting in the flagged questions being re-opened. That's actually quite good - the chance of getting a question re-opened via the reopen queue is somewhat less. Part of this higher success rate is almost certainly due to the ability of moderators to reopen anything with a single click - but still, you have to convince them to do so. And this is where the current flags have the advantage over a predefined "please reopen" flag: they give folks an opportunity to explain why the question should be reopened.

To be clear: I'm not totally against this idea; I like that it would increase the amount of community review for closed questions without creating more work for moderators. However, I think there are more effective ways to do that which have less potential for just generating noise in the queue. For example:

Failing all of that, it might be worth adding a re-open flag that prompts for a reason and then displays this in the review queue - but frankly, this seems like a lot of work for a very small chance of success.

Update: declining this, since pretty much everything I suggested has been implemented as described here.

Not the answer you're looking for? Browse other questions tagged feature-request status-declined flags vote-to-reopen .

0
Close votes are to recommend closure flags, as reopen votes are to...what?
90
Propose a privilege to sit in the 500 reputation mark
57
Lots of questions in the reopen queue
26
Please don't ask people to use custom moderator flags to get questions reopened
4
Give 2k users a 'don't put this in the reopen queue' checkbox
0
Nobody in my community has the power to re-open a question
23
Should questions be added to the reopen queue as soon as they're edited by the original author?
12
Let reviewers know if a suggested edit will push the question into the reopen queue
6
Send 'on hold' question to Reopen queue when OP edits it the first time
-7
Automatic flagging of question for potential reopening if an answer reaches certain score
See more linked questions

550
How about a "Vote not to close" option to counter the "Vote to close"?
852
Can we have the ability to retract a close vote before it closes?
153
How do you reopen a closed question?
399
Add a way for moderators to cast a normal, non binding close/open vote
446
Reward finding duplicate questions - +10, +2, -5
1245
Don't throw away all votes when a user is deleted
418
Add an "I don't understand" option for review audits
420
Can a machine be taught to flag spam automatically?
188
Testing three-vote close and reopen on 13 network sites