Edit was approved by… no one? Not even Community♦? [duplicate]

Ask Question
Asked 8 years ago
Active 8 years ago
Viewed 602 times
51
This question already has an answer here:
Reviewing suggested edit of own post after completing 20 reviews (1 answer)
Closed 7 years ago.

I didn't like the fact that the suggested edit removed the "useless code and comments", and was going to reject the edit. But it got approved.

So I was going to yell at whomever approved it and then roll it back. Except... 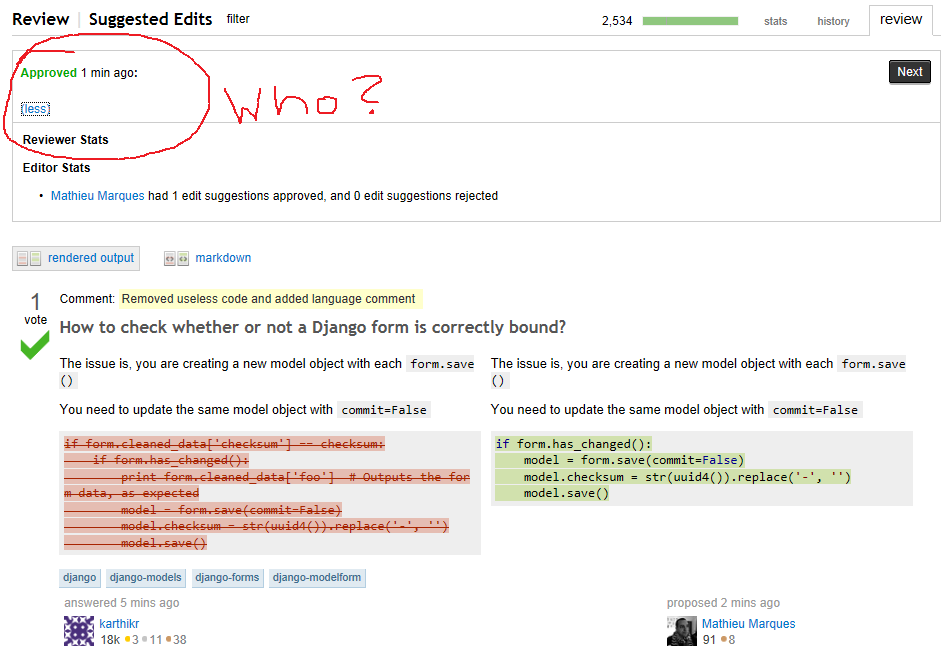 No one approved the edit? Not even Community♦? I was under the impression that sometimes Community♦ would auto-reject or auto-approve an edit, but at least would still be listed as the Reviewer. Am I missing something?

It just happened again, how spooky. I know it's not hurting anything, but I'm genuinely curious how this is happening, since it doesn't seem to be an isolated case.

bug review suggested-edits
Share
Improve this question
edited May 23 '17 at 12:36

I created a SEDE query that shows the suggested edit for the first edit mentioned in the OP. There are no votes for it when I look at the SuggestedEditVotes table. There are votes for the other edit that user made, so it's nothing specific to the user.

This query shows all of the edits that exist with no approvals but an approval date that is not null. There seem to be a run of them at certain times - like 3/13 3:20:00 UTC - which suggests there's a database glitch or something like that where the table isn't properly updating.

Not the answer you're looking for? Browse other questions tagged bug review suggested-edits .

28
Reviewing suggested edit of own post after completing 20 reviews
13
Edit was rejected without reviews?

293
How do suggested edits work?
163
Do we need a 'reject and improve' button?
417
Decision on rejected edits should be displayed as a notification to the editor
356
Reject an already-approved suggested edit when rolling it back
534
The current review system encourages fake reviews; some people upvote everything rather than actually fixing problems
107
Why does the Community user approve and reject edits?
107
Give Community ♦ a review ban
306
Moderators should be able to manually ban users from suggesting edits
28
Why was a suggested edit approved despite a mod's rejection and without OP's approval?