More than a couple of people have suggested making it possible to remove/cancel/undo/whatever a moderator flag. Some seemed to be worried about flag weight or whatever. (I know "flag weight," per se, is gone; that doesn't mean mis-flagging isn't monitored.) I don't care about that, I care about wasting moderator time, and avoiding silly misunderstandings.

There is exactly zero reason why a moderator should have to look at a flag I've raised if I see that the reason for the flag has been corrected, and it leads to seemingly-nonsensical flags (because by the time the mod sees them, the situation isn't as described) and nonsensical replies to those flags from moderators (because things have changed).

This can be avoided by giving users with sufficient rep (or whatever other measure you want to use) the ability to remove their own flag prior to a mod getting to it.

Most of the requests for this (e.g., here, or here) don't actually have a status-declined on them, but overall it seems as though there's been a decision not to allow users to cancel their own flags. Could we revisit that?

This has since been implemented.

Now, you can retract post flags - even custom flags - after having raised the flag by opening the flag dialog again, and clicking "retract flag": 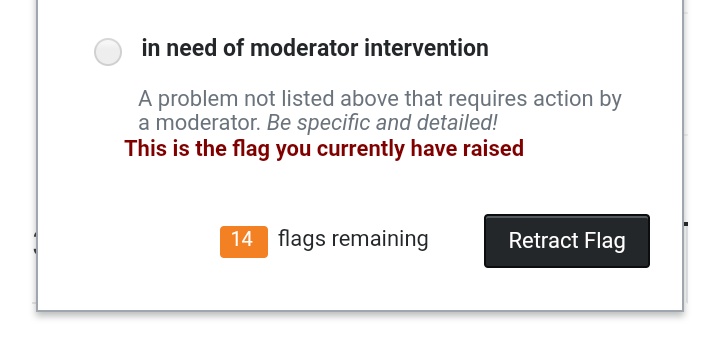 After clicking, the flag won't be shown as pending to mods, and it does not count against you for a flag ban.

If you retract a spam or rude/abusive flag, you won't be able to flag it with either one of those again. The same goes for VLQ and NaA flags.

You should get a popup saying "your flag has been retracted" after retracting the flag.

Not the answer you're looking for? Browse other questions tagged feature-request flags .

462
Cancel misclicked flags
164
Allow recovery from flag hellban
152
Can we have a way to undo a flag?
110
What happened to flag weight?
62
Make it possible to retract comment flags
9
What's the normal delay for a flag to be dismissed?
2
Do i still lose flag weight if i got a declined flag, yet the question gets closed?