Moderators can annotate users (on the main sites), those annotations are only visible to other moderators and the SE team. This is very useful for a moderator that does not know the history of the user. Previous behaviour plays an important role in moderator decisions, and it can decide whether the moderator just warns the user to stop that behaviour, or suspends a user that has been warned previously and should know better.

On chat, nothing like this exists. Moderators can see a list of previous flags (which is rather hard to interpret and doesn't even tell us if the flag was validated or not), but even previous suspensions are not visible to moderators.

As chat flags are global, it is very likely that a moderator unfamiliar with a specific user will act on flags. In such cases, having annotations available would be very useful to quickly get up to speed on any history the user has. As it is now, many moderator decisions are based only on the flagged post, and maybe a few posts before that, but ignore the history of the user as the acting moderator often just doesn't know it.

The "moderation tools" section of user profiles now has a button titled "annotate user" that allows you to attach a free text annotation to the user.

If a user has ever been suspended or annotated, the user profile will prominently show the number of issues, similar to how it works on the Q&A sites:

Inside the live chat room, the user info popup contains this information as well: 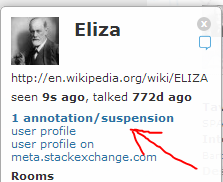 Clicking either of these takes you to a page that lists all this user's annotations and suspensions.

All of these things are obviously only visible/available to moderators.

Not the answer you're looking for? Browse other questions tagged feature-request status-completed chat moderator-tools annotations .

44
Ability for moderators to annotate posts as you can annotate users
139
Can we have drafts for moderator messages?
168
Add escalation system to chat flags
1250
Don't throw away all votes when a user is deleted
107
Please provide moderators with better tools for moderating users in chat
163
Flags in chat are defective by design
308
Moderators should be able to manually ban users from suggesting edits
325
Toward a philosophy of Chat
277
Make moderator messages anonymous
54
Share annotations and suspension information network-wide for repeat offenders